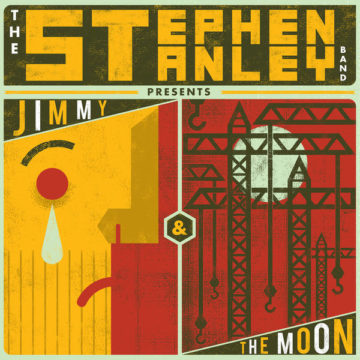 Tales of growing up in Toronto’s east end, the demise of a beloved bar in the Junction (“The Troubadour Song”) and the final days of his grandfather’s life working the night shift at a sporting goods store under the famed Yorkville coffeehouse The Mynah Bird, where Neil Young and Rick James got their start.

Along with bandmates Chris Bennett, Gregor Beresford, Chris Rellinger, and special guests that include Hadley McCall Thackston, Kate Fenner and Sarah McDermott, the band has created a haunting and memorable musical document.

Key cuts include the title track, “Jimmy & the Moon,” which is a classic and really showcases Stanley’s writing chops. Other noteworthy songs are “The Troubadour Song,” “Things I Wish I’d Never Seen,” “By Her Side” and the Pogues-like duet and first video “Next to Me,” featuring Stanley and Hadley McCall Thackston.

Stanley and producer Brown have created some adventurous and jangly spins of rock/pop and folk energy that shine the spotlight on Stanley’s formidable songwriting, vocal, and guitar-playing skills.

Gerry Young is President of Current Records and Management, and author of the 2011 biography Pop Goes The Weasel: Rock And Roll Off The Record, available at Indigo/Chapters, Barnes & Noble, and Amazon.com. He has recorded and managed Juno Award winning bands Martha And The Muffins and The Parachute Club among others.
RELATED ARTICLES
album reviewslowest of the low
7.0