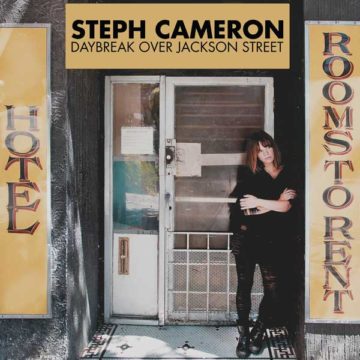 Steph Cameron made waves with her debut record Sad-Eyed Lonesome Lady (2014), an effort that garnered its fair share of acclaim and rave reviews. Her sophomore release, Daybreak Over Jackson Street shares the same heartfelt spirit and intimacy that drew listeners in the first time around. After a great deal of touring and writing, the roots singer returns with tracks that reflect a confident songstress with maturity, experience and an empathetic eye.

Cameron’s title track exemplifies the spirit of an album that draws back the curtain on human experiences. The song speaks to urban poverty in modernity, alive in descriptions of gated fences, liquor stores, and a faltering justice system that fails the ones it’s meant to protect. The contemplative record exposes social, political and personal journeys through its depictions of place and snapshots on humanity.

“On My Mind” takes on the meandering and tormented thoughts of a cocaine addict, while “Richard” dives into the ephemeral nature of life through moments and memories of a relationship in East Vancouver. “You Oughta Know By Now” speaks to letting go of heartbreak and avoiding the patterns of our past, “Oh, I spent all my younger years trying to break the chains you used to bind me/And all the ways you used to hold me, I worked hard to put that all behind me.” Cameron is apt in her ability to synthesize meaning and draw out familiarity in her songs, all while taking on a variety of angles, tones and perspectives.

Thematically, the record indulges reminiscences, lovesickness and loneliness. The subject matter feels even more intimate set against the sparse beauty of Cameron’s finger picking and spurts of harmonica. There is a timelessness to Cameron’s work with the heavy influence and starkness of sixties folk. Her captivating vocals and moving lyrics converge in Daybreak Over Jackson Street in a record that lingers in your mind long after you’ve stopped listening.

Elizabeth is a Toronto via Caledon writer whose rural upbringing left a lasting love of anything with a banjo and an upright bass. She scours Toronto venues for both the musical talent and the beers on tap.
RELATED ARTICLES
album reviewscaliforniapheromone recordings
9.0