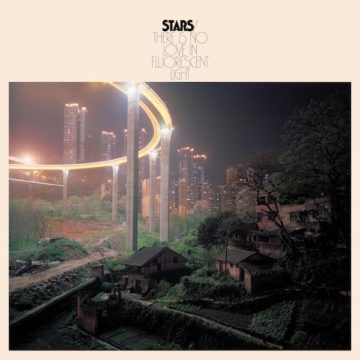 Stars
There Is No Love In Fluorescent Light
Last Gang Records

The prolific “cool rock” Montreal band Stars, led by Torquil Campbell and Amy Millan, have released their latest album, the 12-song opus There is no Love in Fluorescent Light.

It’s easy to see the comparisons with their spiritual, if not musical compadres Metric, Broken Social Scene and Arcade Fire. All are independent Canadian artists with international musical aspirations.

Songs like “Real Thing,” sung by Millan and “Alone,” sung by Campbell, are the standouts of the bunch, as shown by their airplay on contemporary traditional radio. On another song, “Maze,” Campbell channels Win Butler of Arcade Fire as he sings “I fell into a Dream” over and over in the chorus. Other tracks like “We Called It Love” and “Hope Avenue” add to the eclectic mix.

Although the band has released eight albums and five EPs in its 16 years of existence, this new album should take Stars to the top of the international charts sometime soon.

Gerry Young is President of Current Records and Management, and author of the 2011 biography Pop Goes The Weasel: Rock And Roll Off The Record, available at Indigo/Chapters, Barnes & Noble, and Amazon.com. He has recorded and managed Juno Award winning bands Martha And The Muffins and The Parachute Club among others.
RELATED ARTICLES
album reviewsalonelast gang records
8.0