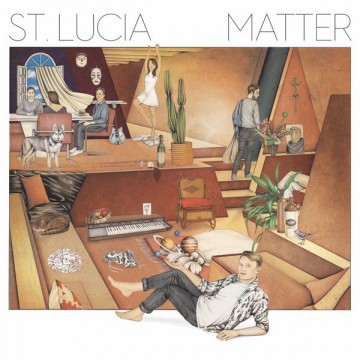 St. Lucia’s initial success came from his 2013 hit single “Elevate,” an electronic indie-dance piece of pure pop hooks and beaming videogame-like effects. His first record When the Night was consistent in this soundscape for the most part, but lacked many other noteworthy songs that could stand on their own.

With his sophomore release, Matter, Saint Lucia continues his wild exploration of endless sound effects blended through pop melodies. Here, we find the lovechild of OK Go and house music. Trade bass drops for catchy hooks and ‘80s influence and, voila, St. Lucia is formed. Matter presents the kind of self-awareness a sophomore effort should. There’s a niche the artist has found that allows him to work within its limits while still being creative. The album is thankfully far more energetic than its predecessor. At times, this energy comes in the form of Super Mario comparisons, ever present on “Physical,” whose chorus goes full throttle on collecting coins and jumping on Koopa shells. Some may find its excessiveness too noisy, but there’s an appeal here that suits the genre well, and dazzles when it strikes all the right chords. The greatest example of this is the appropriately titled “Game 4 U,” whose strength is found in its Passion Pit-like chorus and backing horn section. Lead single “Home” manages to deliver similar catchiness from its heavily layered production. It is the slow moments on Matter that end up, unsurprisingly, slowing it down (see “Love Somebody”). While most of these moments build into higher energy as they progress, St. Lucia might need to rethink the arrangements on his lower tempo music.

What’s most noteworthy about Matter, though, is its ability to keep the energy up. Sort of like an athlete playing keep-ups, once St. Lucia has the ball in the air, he manages to impressively maintain its off-ground status. And he’s not kicking it the same way every time either – most songs find unique ways of using similar effects. The result is an impressive set of 11 tracks that mostly stand well on their own but also work as a cohesive whole.

Robert Defina is an avid critic both on paper and in person. He spends more time writing album reviews than he does worrying about his future. He hopes that this sort of procrastination never grows old.
RELATED ARTICLES
album reviewshomest.lucia
7.0