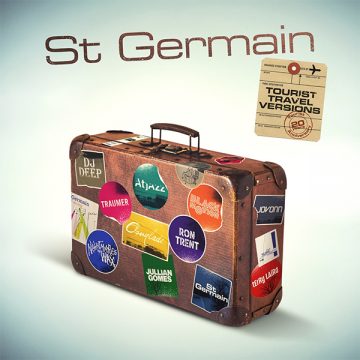 Ludovic Navarre, better known as the French house and nu jazz DJ St Germain, has recently released a 20th anniversary remix album of his hit album Tourist, that originally launched in 2000. The 11-track remix album is filled with the works of artists hailing from the UK, France, the US, and South America, including the likes of Ron Trent, Atjazz, Jullian Gomes, and Black Motion.

Quite a few of the tracks on this remix album are takes on St Germain’s classic song “Rose Rouge”. Anyone familiar with the original release of Tourist will be instantly familiar with the smooth and dulcet tones of this hit, and though on paper it may seem repetitive, the spin that each artist has put on this song is fresh and lively.

This anniversary release of Tourist makes for great easy listening. As an album to play at home, it makes for relaxing yet upbeat background music for a social gathering or studying alone. It’s the best kind of chill out music to both zone out and dance to.

Terry Laird’s version of “Rose Rouge” has a wonderful African tribal percussive bassline that keeps the song pulsing along. That is just magic. The saxophone solo is also simply superb. On the opposite side of that, Black Motion’s version of “Sure Thing” is smooth and sleek all over.

The 20th Anniversary Travel Version of Tourist is great to have for any music lover, regardless of what music you normally gravitate to. The rhythms are simple enough to be enjoyed by anyone anywhere. With the various influences woven in by the different artists that have contributed to this remix album, Tourist manages to transcend genres.

Samantha is both a writer and a fan of the arts and has been able to find numerous ways to pair the two. Eager to dive head first into writing for Spill, Samantha is an avid partaker and reviewer of live art in Toronto serving as an editor at Mooney on Theatre exploring live local theatre, she's a photojournalist for Been Here Done That, a travel, dining and tourism blog that focuses on Toronto and abroad and previously for Lithium Magazine. She's passionate about music, theatre, photography, writing -- not necessarily in that order. She drinks tea more than coffee, prefer ciders over beers, and sings karaoke way too loudly. You can follow her on various social media including Facebook, Twitter, and Instagram.
RELATED ARTICLES
album reviewalbum reviews
8.0