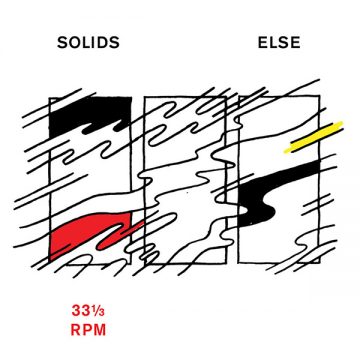 Sometime in the early teens of the 21st century, a niche group of rock bands decided they were completely burned out on jangly Libertines-esque rock music, and dusted off their old Jawbox and Sebadoh cassettes. Fortunately for music nerds, the western world was already being inundated with reunions and reboots in films, music and television from the ‘90s, and a sudden surge of quality new bands reminiscent of that era wouldn’t come as such a shock.

Montreal duo Solids is one of those bands. They are the sonic equivalent of flipping through a high school yearbook over drinks with an old friend. The name checking, the nostalgia, and the perspective that comes with the passing of time. A noticeable amount of people you went to high school with are now real estate agents. Also, half the people you grew up with that were assholes have kind of mellowed out. Not bad.

Else is 20 minutes of loud, melancholy Mope-Rock spread across four songs each patiently taking its time to plant itself in the listener’s head. The songs are full of muscle, but not exactly aggro. They pick you and swing you around like a young parent does with their child. Everything feels big and exciting, but in no way dangerous.

“Wait It Out” is the best example of this, filled with meaty, morose chords and resigned drums. Although it appears to be a song about unrequited love or loss, hearing co-vocalists Xavier Germain-Poitras and Louis Guillemette murmuring “nothing at all” throughout the coda of the song feels warm and comforting.

Else is rounded out with “Shine,” opening with a loopy, hypnotic riff backed by some terse drum work. About halfway through the song the drums die out, vocals soften, and the song slowly decays into serene delay-pedal feedback.

The return of the ‘90s, and the mining of gen-X nostalgia has been a mostly hit-or-miss affair. Nobody needed a Guns N’ Roses paycheque reunion, but a few episodes of pseudo-Mr. Show sure were a pleasant surprise. Solids fall into the latter category, and though they might not necessarily make the canon of groundbreaking noisy guitar rock, they’re great to have around now that Codeine isn’t making any more records any time soon.

Marko Woloshyn is a Mississauga-based writer and musician. He owns a limited edition repressing of Mclusky Do Dallas and one time at a concert a drunk woman told him he looked like Keira Knightley.
RELATED ARTICLES
album reviewsdine alone recordsedward sharpe and the magnetic zeros
7.0