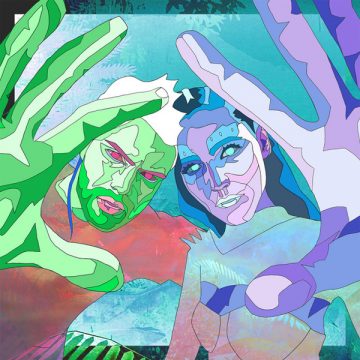 If you’re looking to dance, or looking for an album that has all different kinds of groove, from geometric to slow burn, to a bouncing house beat….you’ve found it.

Dancing On The People opens with “Swing”, starting with a rising string section that comes back to ground you throughout the song, it only gives way to the lyrics delivered rhythmically in Portuguese, something Sofi Tukker is close to being fluent in.

The groove is never dropped, not once, throughout the whole album. “Ringless” is a brief reprise dropped into the middle of the album that focuses more on the build than the volume, and it’s the perfect precursor to the best song on the album: “Purple Hat”.

The groove on this song is undeniable. It’s clear they know what’s worked for them in the past, they’ve carried it forward, and we’re all better off for it. The nonsensical lyrics are there to give you something to hold on to while you let go and dissolve into the flow of the song.

I could go on and describe individually, and in great detail, why each song should get a listen but I don’t want to give it away. Just make sure when you press play on this album, you’re ready to dance.

The Spill Magazine is a Toronto-based online publication dedicated to covering the independent music scene with a strong focus on our thriving hometown talent. Our writers bring you up-to-date news, in-depth features on musicians and reviews for the latest CD releases. We also travel to the front lines for all local festivals including Canadian Music Week and North by Northeast.
RELATED ARTICLES
album reviewalbum reviewssofi tukker
8.0