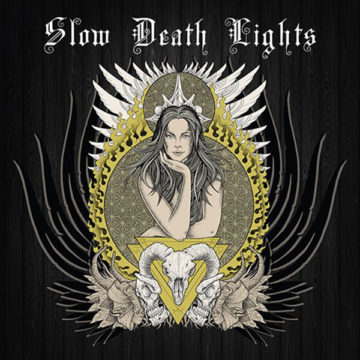 The debut album from Slow Death Lights has been a long time coming.  Their preceding single/EP came out two years ago, but this album has been  worth the wait. Slow Death Lights is the album fans have been expecting and hoping for, and more!  This is rock, straight ahead rock.  Not really made for the faint hearted, and don’t expect any ballads here, when you enter this world, it is rock.

The band refers to their music as ‘stoner rock’.  I think this sells them short.  From the opening track, “Velvet Rags” to the closing of “Watermill”, the band grabs your attention and does not let go.  It is interesting that they bookend the album with perhaps the loudest songs, and for my money it works.

This is a tight four piece band, who are not afraid to play solo, or just come at you with a wall of sound.  But this does not mean the songs are not well structured.  Quite the opposite, these songs are loud, but unlike lesser bands, Slow Death Lights do not use volume to replace a song.  Not to compare them, but much like Black Sabbath, Motorhead and Kyuss some of their songs are downright instantly accessible.  The songs are well structured.

“City of Lights” is an excellent example of a very strong melody and damn catchy tune, but yet it does not lack any energy as a result.  In fact, although not as loud as other songs, it is just as aggressive.  This is not a criticism, but like the greats of the past (and present) in their hands these songs just take off while within a certain framework.  Vocalist and drummer, Andre Skinner knows how to use his instrument, his voice and drums and both add to the songs.  His lyrics, are equally intriguing and although not always clear, they make for interesting listening.  “Blistering heat, and my brain is gone,” Skinner sings in “Ironwood Trees”, “Come down with me to the Ironwood Trees” he later invites you.  I will pass on the invitation, but the song is extremely well produced and the band let Skinner go with his observations of this world, relationships and people.

The album is produced by Skinner, with two songs produced by Brant Bjork (Kyuss, Fu Manchu).  However, the album has a consistent sound.  At no time does the listener hear any difference.  To Skinner’s credit, he knows how to produce and bring their sound together and get the best out of each member.  Eric Allward and Devin Legge duel with their guitar and keeping them grounded is bassist Luke Stackhouse.

Born and raised in Whitby, Aaron discovered music through his love of The Beatles. This led to a career in radio, writing for various publications, and ultimately a radio show about The Beatles (Beatles Universe), which ran for over four years. When not immersed in music, Aaron enjoys spending time with the loves of his life -- his wife Andrea, and daughters Emily and Linda (all of whom have an intense love of music too).
RELATED ARTICLES
album reviewsslow death lights
7.0