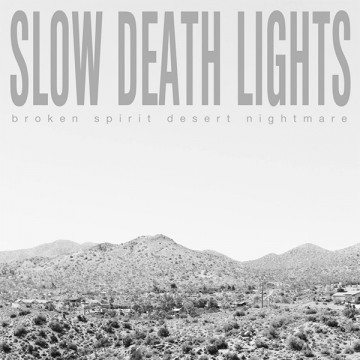 Another fuzzed-out stepchild of hard rock and heavy metal! Toronto-based stoner rock band Slow Death Lights throws down a two-track EP that showcases their veteran ability to go with their verse / chorus / hard guitar riffing / drumming formula. “Slow Death Lights brings together four musicians with diverse musical experiences, from veterans of the Toronto and international touring wars to talented new players ready to make an impression in the always evolving stoner rock scene. From the depths of their souls and in the take-no-prisoners landscape of Joshua Tree, California, SDL have unleashed their debut EP Broken Spirit Desert Nightmare, recorded and produced by Brant Bjork (Kyuss, Fu-Manchu) at Jalamanta Studios in the California desert.” Andre Skinner’s lead vocals don’t sound overly harsh or coarse, yet are lacking some bite in timbre to create more listener excitement. With songs like “Dirty Chores” and “Watermill,” the band follows the soft/loud instrumental pattern we’ve heard over and over again, with Devin Legge churning out simple yet catchy repetitive guitar riffs and head bobbing drumbeats. It’s with these repetitive guitar riffs that “Dirty Chores” loses its steam and we wonder if it could it have been one minute shorter. Luke Stackhouse’s bass playing is good enough not to detract audiophiles from the tracks, as rhythm guitarist Eric Allward completes the quartet with the ability to stoke the fires of a track at the drop of a hat and not sound out of place. In the end, the band adequately showcases its talents of arranging rocking hard guitar riffs imbued with guitar solos. It will be interesting to see how Slow Death Lights continues to hone its standard instrumentation while attempting to create its own evolving, defined, stoner rock sound. The two-track Broken Spirit Desert Nightmare doesn’t aim to break contemporary stoner rock conventions, but we appreciate their familiar, formulaic delivery as much as they enjoy rocking out the jams.

Insert pretentious stuff about me here. I was born at a very young age. I am pretty, funny... without the comma. Easily distracte
RELATED ARTICLES
album reviewsslow death lights
9.0