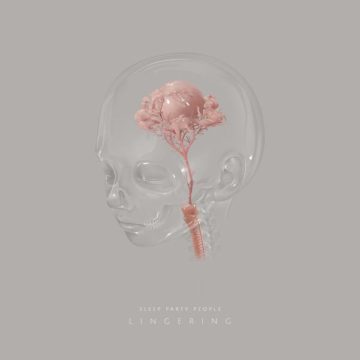 Sleep Party People is really Brian Batz, a Danish artist who has been recording since 2010.  This is the fourth album by Batz under the name Sleep Party People, and the first album he has recorded since signing with Joyful Noise Recordings  A suitable label for this talented individual.  But it also is his first signing in North America – getting an album just became a whole lot easier.

Batz’s last album was the stunning Floating (2014), a very successful and well-received album.  It would seem to be a very difficult album to follow, but as usual, Batz not only equals his previous work, he surpasses it.  Lingering, in short, is one of the finest albums issued this year and is a strong contender for album of the year.  Batz has assembled a collection of 12 stunning songs.

The melodies flow while Batz adds his touches to the tunes. His singing voice is unique and very pleasing. At times it is like listening to an audio version of Alice in Wonderland, not in content, but overall feeling of awe. For this album, Batz is Dorothy, opening the door to a coloured world. Technicolour at that. Not saying that his previous albums have been black and white, for they most certainly are not, but this album is so full of layered sounds and beautiful lyrics.  “And the rain began to fall in reverse, It’s exactly like a dream,” sings Batz in the first single release from the album, “The Missing Steps”. And that sums up a great deal of the album: dreamy, atmospheric.

Lingering is psychedelic in a 2017 style, and Batz is smart and talented enough to pull it off. The use of traditional instruments and electronica blend together as if they have always been played together. Listen to “Fainting Spell”.  He blends synthetic drums with real drums and produces an interesting rhythm and backing track. He is not the first to do it, but he does run with it and achieves greatness with the sound.

Through it all, there is the sound of a very human person making very human sounds.  The addition of the Danish band Luster (on the rocking “Dissensions”) and Beth Hirsch (on the stunningly beautiful “We Are There Together”) adds to the overall feel of the album. Batz knew the songs needed a little extra, and he found the perfect fit for the songs. The work of an artist.

This is a brilliant album. One that should be enjoyed in its entirety to get the full effect of the mood and production of the album. The sequencing of the songs and every aspect to the record add up to a stunning work by a major artist. Lingering is a fantastic album.

Born and raised in Whitby, Aaron discovered music through his love of The Beatles. This led to a career in radio, writing for various publications, and ultimately a radio show about The Beatles (Beatles Universe), which ran for over four years. When not immersed in music, Aaron enjoys spending time with the loves of his life -- his wife Andrea, and daughters Emily and Linda (all of whom have an intense love of music too).
RELATED ARTICLES
album reviewsjoyful noise recordingslingering
8.0