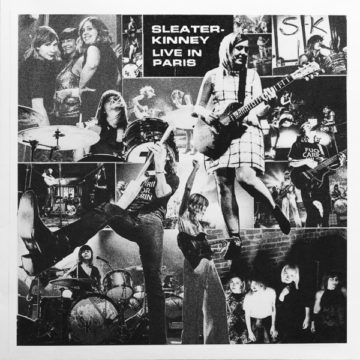 This legendary feminist-rock trio made their mark throughout the late 90s and early 2000s as a raw, guitar driven, politically charged powerhouse. The all-female group garnered themselves a loyal fan base and a serious cult following throughout their career, whilst building one of the most solid rock discographies of the decade. Sleater-Kinney took a near-decade hiatus, having disbanding in 2006, but returned with a critically acclaimed LP, No Cities to Love, in 2015. The ladies were welcomed back by their dedicated fan-base. This new comeback has definitely reminded us of the impression Sleater-Kinney made on modern rock music, and what better way to celebrate the iconic trio than with their first ever live album, Sleater-Kinney – Live in Paris.

The group has always been commended for their live performances. With so much energy and raw emotion crammed into every song, it’s hard to contain the true impact of their tunes within a studio recording. Live in Paris is long overdue and the group hold nothing back as they rip through a rowdy set that spans their career, letting the “riot grrrls” take hold once again.

Carrie Brownstein and Corin Tucker create a whirlwind of gritty guitar lines that play off each other and rip through each track, perfectly fitting with Tucker’s powerful vocal vibratos. All the while, Janet Weiss’ insanely tight drumming booms behind every note, creating expertly crafted musical mayhem. The set opens with a standout track from their newest album, Price Tag, which has clearly become a fan favourite. You can feel the energy through your speakers as the grimy tuned-down guitar lines and fast-paced drums creates a full wall of sound, even in the absence of a bass player.

Tracks both old and new blend into one cohesive sound as Sleater-Kinney takes us back to some old favourites early in the set, a standout being “What’s Mine is Yours”. As the tempo slows down in the second half of the song the ladies breakdown into a sludgy jam, slowly building back up with Tucker’s consistent wailing and some impressive drum fills, leading to an explosive finale. “Surface Envy” is another infectious tune from the group’s newest album, featuring plenty of great riffs, almost as if Brownstein and Tucker were both fighting for the lead on this track and just decided to go with it. A back and forth exchange of strange chromatic licks and harsh chords make for a unique, high-energy addition to the album.

Sleater-Kinney barely gives their fans a chance to take a breath throughout the night, as consistent favourites are in rotation. They go way back in their catalogue when they bust out “I Wanna Be Your Joey Ramone”, and we would have a hard time arguing with Tucker when she belts out “I’m the queen of rock n’ roll”. Their track “Jumpers” is a more mellow but captivating performance, exploring the dark topic of suicide. The night came to a close with the classic “Dig Me Out”, and Sleater-Kinney finally gave their audience a chance to cool down with their final song of the evening: the satirically tender “Modern Girl”.

The trio has succeeded in charming their fans both old and new with their late-90s alt-rock aesthetics, while at the same time avoiding sounding dated. Their sound is still modern, and both the feminist and political views explored in their lyrics are more relevant than ever. Live in Paris has helped to cement Sleater-Kinney’s presence in modern rock music. So, if anyone was worried that their come-back was a one-off reunion, you can rest easy. The intense energy and attitude they showcased to the world all those years ago has not wavered, and people are clearly still excited to hear what Sleater-Kinney has to say.

Growing up in the dull suburbs of Southern Ontario, Elijah gravitated towards the city at a young age. With a healthy addiction to live music, and a constant itch for discovering his new favourite band, he finds himself happily submerged in Toronto's music scene. With his work appearing thus far in Sock Monkey Sound, and The Spill Magazine, he's going to keep this writing thing going for a while.
RELATED ARTICLES
album reviewssleater-kinneysub pop
9.0