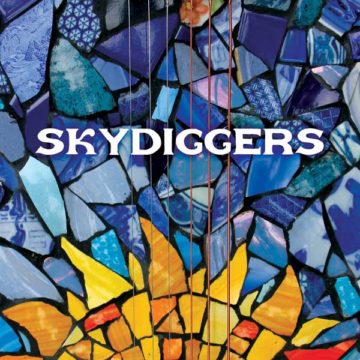 Skydiggers are back with album 14 (my count, not including live recordings and compilations) and as always this is cause for celebration. The pure joy of Skydiggers is one never knows exactly what they will be getting when the album is cracked open. Sure, their basic sound is always there and Andy Maize’s vocals are instantly recognizable, but truly beyond that it is always a thrill to hear where they go.

Warmth of the Sun is no exception. This is an excellent album full of brilliant songs, great lyrics and observations of the world. Warmth of the Sun is the first Skydiggers album since 2014’s Here Without You – The Songs of Gene Clark (a tribute to Gene Clark and The Byrds) and it is their first album of original material since 2012’s Northern Shore. There have been other projects by members of the band, but this is their first album of original material in quite some time.

There are two incredible covers on the album. Skydiggers take on The Hollies, “The Air That I Breathe”, they don’t add much to the original but it sounds fantastic. Their arrangement and Maize’s voice make this tried and true song sound beautiful. The other cover, “The Rock”, originally by The Tragically Hip speaks for itself in their choice of a cover to pay tribute to the iconic Canadian band. It is stunning. .

But the album’s beauty does not lie with their choice of covers. It lies with the originals and the playing of this brilliant band. The title track was inspired by Gord Downie’s album and book Secret Path and the ongoing treatment of First Nations communities in this country. “All I can say, Is let’s make this right” kicks off the song and the album. A simple plea but it says a great deal.

This band is sincere in the thought that everyone deserves to feel the ‘warmth of the sun’, and this is what Skydiggers have always been so good at doing. They tell stories, morality lessons, without bashing anyone over the head or excluding. Maize uses language to express thoughts that are clearly personal to him, yet others can identify with.. He also writes in such a way that he could be addressing one person or a nation (“An Apology” is a great example).

Skydiggers, for this album, have altered their line-up, but it is still Skydiggers. Joining vocalist Andy Maize and guitarist Josh Finlayson are Derrek Brady (bass), Michael Johnson (keyboards), Noel Webb (drums) and Jessy Bell Smith (vocals) and Aaron Comeau (guitars and some keyboards). Michael Timmins (Cowboy Junkies) recorded and produced (with help from Maize and Finlayson) the whole project. This band creates a wonderful sound and Timmins knows how to bring all together. The have a high level of energy, while never losing the focus of the band. A remarkable achievement.

This energy comes from the fact that some of the songs were recorded live on the floor. The sound of a band together in one place playing live. One can hear the joy and the love of music come through the playing musicians and singers playing off each other. It makes for intimate and at the same time intense listening.

Warmth of The Sun is an album that demands to be listened to, not background music, not party music, but an album to put on the turntable, relax and let the music and words surround you. Yes, it is that good.

Born and raised in Whitby, Aaron discovered music through his love of The Beatles. This led to a career in radio, writing for various publications, and ultimately a radio show about The Beatles (Beatles Universe), which ran for over four years. When not immersed in music, Aaron enjoys spending time with the loves of his life -- his wife Andrea, and daughters Emily and Linda (all of whom have an intense love of music too).
RELATED ARTICLES
album reviewslatent recordingsskydiggers
10