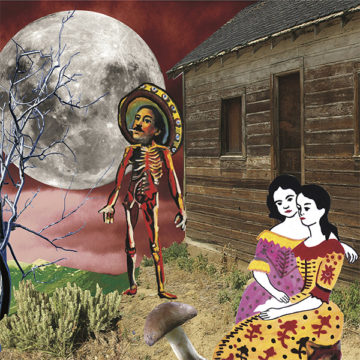 Silkworm
In The West (Reissue)
C/Z Records/Comedy Minus One

Originally released in 1994, Silkworm’s album In The West will be reissued on vinyl for the first time in celebration of its 25th anniversary, as well as including all sorts of extra bonus materials (mostly live recordings) on the included CD. For long-time fans of the band, it is shaping up to be a must-have addition to the vinyl collection

Listening to Silkworm for the first time, you can immediately hear that this is a band from the early ‘90s. If you press your ear to it even closer, it’s also possible to hear how this album contains within it all the elements of an entire era of music coming out of Seattle in the early ‘90s. While Silkworm is probably not the best-known band with roots in the mythical Seattle grunge scene, the bands coming of age alongside them no doubt knew them well and borrowed from them selectively. You can hear a little bit of everything on here: Jiggly basslines, thumping drums, escalating guitar solos, and vocals that oscillate between something reminiscent of Counting Crows at times and Parquet Courts talk-punk at others. Sometimes it feels like all of that at once. The opening track “Garden City Blues” stays between its own self-established lines until the last thirty seconds or so when it descends into more noisy grunge rock. This shiftiness within songs from one sound to another, or one speed to another, is a prominent feature of the whole album.

Overall, Silkworm seems like a band pulled in too many different sonic directions for this reviewer. Songs often start one way and twist and turn into something else by the end in a way that left me wanting more consistency and coherence from beginning to end, or at the very least from song to song.

Dan Kennard is an English teacher and fiction writer living outside Kansas City, Kansas where he lives with his wife, two children, and the cats.
RELATED ARTICLES
album reviewalbum reviews
7.0