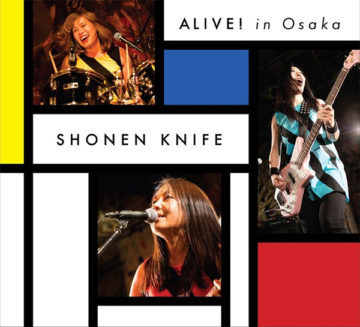 Shonen Knife is a Japanese punk band, formed in 1981 in Osaka, Japan. Their classic debut album, Minna Tanoshiku, was released in 1982 and since then they have issued an astonishing 21 studio albums. For this release, they have recorded a concert in their hometown, Osaka. Alive! In Osaka is a visual (DVD) and audio (CD) document of their return home show in 2017.

The band has been around for 37 years and during that time there have been numerous member changes. The mainstay, and lone original member, is Naoko Yamano (guitar and lead vocals). On this album and tour, the band consists of Naoko’s sister,  Atsuko Yamano (bass, vocals) and Risa Kawano (drums, vocals).

The DVD is a straight ahead document of the concert. No trick photography, no interview clips and thankfully very little audience singing. They are incredibly fun to watch live and one sees how much they enjoy what they are doing. Watch them sing “Rock ‘n’ Roll T-shirt”. Their happiness and enjoyment is infectious. And the humour is there as well. “All You Can Eat” is one of the funniest songs I have heard in a long time and it was good hearing it again.

The music is what one would expect. They touch on all aspects of their lengthy career, well known songs as well as a feel album cuts that may not be overly familiar to casual fans. Perhaps the biggest surprise is their cover of Nick Lowe’s “Cruel To be Kind”, which works on so many levels. It is worth the time and admission alone.

For any band to last this long is a major achievement, but for a punk band from Japan, it is more than that. I doubt the band even thought they would be around this long and not only maintaining their audience but continually adding to it.

Alive In Osaka! is a wonderful document of a punk band. Shonen Knife may not have changed their style a great deal but they have grown. The newer songs sound more mature than the older songs and their playing is tight. Their vocals and harmonies are spot on and it is a lot of fun. And the energy is stunning.

I dare you to listen to or watch Alive In Osaka! and refrain from smiling. This set brought back many memories and have created new ones. An excellent set!

Born and raised in Whitby, Aaron discovered music through his love of The Beatles. This led to a career in radio, writing for various publications, and ultimately a radio show about The Beatles (Beatles Universe), which ran for over four years. When not immersed in music, Aaron enjoys spending time with the loves of his life -- his wife Andrea, and daughters Emily and Linda (all of whom have an intense love of music too).
RELATED ARTICLES
album reviewsALIVE! In Osakashonen knife
10