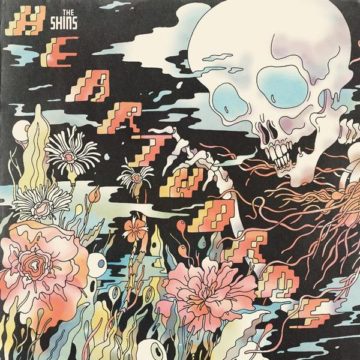 The Shins are releasing their fifth album, Heartworms, on March 10. The album is very different from The Shins’ popular debut studio album from 2001, Oh, Inverted World. James Mercer shows off his lower vocal range on this album. It adds some good dynamics to a lot of the tracks. In some songs, like “Mildenhall”, the band utilizes a less produced sound than they are known for. This plays in their favour in setting this release apart from their earlier work. Unfortunately there are still some moments that feel overproduced. Those moments are largely the weakest parts of the album. Some of the strongest parts of the album are courtesy of drummer Jon Sortland who joined The Shins in 2016.

There is an immediate, undeniable energy to the album’s opening track. “Name For You”  The track has a catchy, elegant melody almost reminiscent of a variety show act. The following track, “Painting a Hole”, is jarringly different. It has a much darker tone and heavier rhythms. The vocal effects used on “Painting a Hole” create a definite contrast between the two tracks. The first two songs are very different but equally intricate. The obvious attention to detail really pays off. “Cherry Hearts” is among the low points of this album. Initially it has a good pop rock energy to it but there is no real payoff. The effects layered onto the song make it difficult to understand some of the lyrics. The lyrics that are easily made out are repetitive and a little juvenile seeming for a band that was formed over 20 years ago. “Fantasy Island” on the other hand is a fantastic song with a dynamic melody. Mercer gives a very emotional performance. The lyrics are interesting and touching. Every instrument is in place. The backup vocals really fill in the song. “Mildenhall” is equally touching. It is a great song about family and music. Effects are kept to a minimum in “Mildenhall”. The end product is really lovely. The title track, “Heartworms”, has a really fun rhythm to it. The guitar and drums go to great places during the song. “So Now What” resembles something off Oh, Inverted World more than anything else on the album. There are certainly differences but not enough for it to feel fresh. “The Fear” is the final song on the album. It is very relaxed and features some interesting instruments. The percussion line is particularly calming. It would be a nice play out if it weren’t so very long. At three and a half minutes it would have been pleasant but a further two minutes was too much.

The album as a whole is quite good. The chances the band took created opportunities for interesting, unexpected moments. Its the chances they didn’t take that held them back. The experimentation was great but when the band fell back on an old sound or idea they fell flat.

Daniel Mallett is a young journalist from London, Ontario pursuing a career in arts and entertainment writing. He enjoys music, theatre and visual arts and hopes to learn as much as possible about the artists working in Canada today. Mallett is also one half of the Toronto based folk duo Howl & Other Problems.
RELATED ARTICLES
album reviewssony musicthe shins
6.0