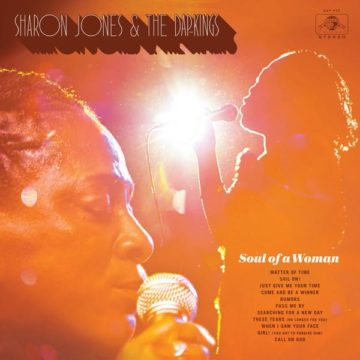 Sharon Jones & The Dap-Kings
Soul Of A Woman
Daptone Records

After her passing on November 18th, 2016 following a fierce battle with pancreatic cancer, the album that Sharon Jones’ had been working on was shelved. Now, one day shy of the first anniversary of her death, Daptone is releasing Soul Of A Woman. Continuing the tradition of being backed by The Dap Kings her first post posthumous release is  a monument to both her legacy and influence as the record exemplifies exactly why she was one of the leading pioneers behind the continuously growing neo-soul movement that is sweeping across North America.

Opening with a purely infectious shuffle of “Matter Of Time”, Jones and The Dap Kings will leave you no doubt that among the tightest ensembles there is, and they will have you feeling this by the time you hear the last few notes of the first verse. The rest of the first half of the eleven track album, or rather the first side of the record, demonstrates the band performing as if they were one of the top groups on Motown’s roster in 1969, with songs like the emotionally charged blues ballad, “Just Give Me Your Time”, the light Latin flair of “Rumors”, and the gospel of “Pass Me By”. Whether it’s funky, bluesy, or jazzy, Jones sings with a level of conviction and soul that will leave one enthralled. Like stepping into a time machine, the first half of Soul Of A Woman will transport the listener to a smoky lounge in Brooklyn during the mid-1970’s.

The second side of the record has the same effect, only using four orchestral ballads set over the lush sounds of a full string section, providing not only a vast sense of contrast to an already diverse album, but also bringing Jones’ artistry to a level of sophistication and mastery that rivals that of Marvin Gaye and Aretha Franklin. As far as the track that features Jones’ strongest vocal performance, it is a draw between the melancholic and emancipating “These Tears (Are No Longer For You)” and the bombast of “Girl! (You Got To Forgive Him)”, both of which demonstrate two very different sides to Jones’ vocal range. The closing track to the album, “Calling On God”, not only seamlessly ties the two parts of the album together with the use of a blues styled ballad that is accompanied by an organ rather than strings, but also captures Jones at her most soulful over the gospel driven track. The song, closing the record, feels like a goodbye that is both beautiful and somber.

Soul Of A Woman is, simply put, a flawless record that harkens back to the golden era of R&B and soul with a collection of eleven songs that make the passing of Jones feel even more untimely and sad. Furthermore, each song truly demonstrates the best of Jones and The Dap Kings making for a remarkable tribute to the life of Jones, proving once again that she had a truly incredible voice that was nothing short of legendary. Soul Of A Woman might very well be the best soul record of the year, making the final record from Sharon Jones & The Dap Kings a triumph for the artist involved, the legacy of Jones, and- perhaps most of all- the genre as a whole.

A passion for music has always been a part of Gerrod’s life. As a young boy, he was raised on a steady diet of the music from The Chili Peppers, Aerosmith, The Stones, Prince, and others from his mum. Raised in the GTA, Gerrod continued to foster his love for music by attending a wide range of concerts and learning the drums. His unapologetic passion for music has no bounds and has spread to a wide variety of styles, whether it be the 90’s rock that sound tracked his teenage years, the jazz he studied in university, or his newfound love for hip-hop. He recently received his bachelors in music and education from York University and is passionate about writing and reviewing good (and less than good) music. Gerrod is also the drummer and songwriter for a Toronto based rock & roll band, One In The Chamber.
RELATED ARTICLES
album reviewsdaptone recordssharon jones
8.0