SPILL ALBUM REVIEW: SAM ROBERTS – WE WERE BORN IN A FLAME (EXPANDED EDITION) 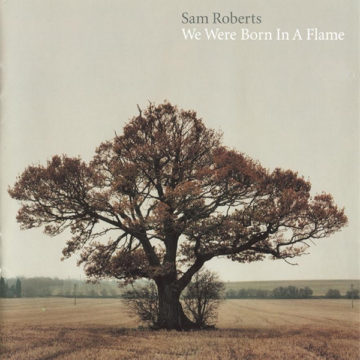 This album will always hold a special place for me; not only is it one of my favourite albums ever made (top twenty at least), it was also originally released in 2003, the same year that my wife-to-be and I moved to the UK for two years. A constant and unabashed reminder of Canada, it was an album that was a go-to selection over the two years we lived away, lines from “Hard Road” like “and her soft brown hair was as long as a Canadian highway” tugging at the heartstrings of occasional homesickness. The album, already one of our favourites, had its place solidified for us when the band came to play in Birmingham, the city we were living in at the time, in front of maybe 50 people, the few Canadians among us singing along loudly and proudly before shaking hands and rubbing elbows with the boys afterwards. We bought from the band, though we already had the original copy, the deluxe version of We Were Born In a Flame which included a reorganized tracklisting and more importantly the song “Climb Over Me”, still one of the band’s best efforts.

The 2018 release of the Expanded Edition includes the deluxe release tracks from 2003 as well as demo versions of four tracks including SRB classics “Brother Down” and “Taj Mahal”, and three previously unreleased tracks, all of which are most definitely worth the listen. In all, the seven new tracks are essential listening for any fan of the band, perhaps especially those who have distanced themselves from the band since their recent sonic departures from the guitar-driven, production-light sound that brought them so much attention.

Giving this album a rating any less than 8/10 would cause me great pain on a subjective front, but even when trying to be objective, it lives up to the rating; this is an album with grit and guitars, rise and fall, choruses to sing along with, hits and hidden gems, and most importantly, both urgency and heart.

SPILL ALBUM REVIEW: SAM ROBERTS – WE WERE BORN IN A FLAME (EXPANDED EDITION)

Br. lives in southern Ontario, grew up on The Beatles and The Journeymen, spent his adolescence immersed in grunge, and his adulthood in British alternative. His greatest joy is seeing his son dance and grow into his own appreciation of the indescribable joy of music...
RELATED ARTICLES
album reviewalbum reviewssam roberts
10