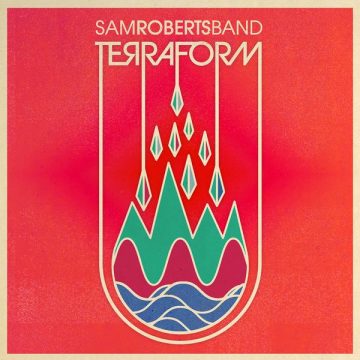 It’s incredible to imagine that the Juno Award-winning Sam Roberts Band has been around since 2001 as it continues to churn out Indie / Alt rock from Montreal, Canada. This is its sixth full album ( third album under the Sam Roberts Band moniker) with 11 tracks, as it sports an interesting title, TerraForm, of which icon Sam Roberts himself explains: “TerraForming is the concept of going to another planet and making it viable and livable for humans. But in a sense, for this record it can be seen as planting the seeds for that sort of renewal in your own life – that regardless of how much you have broken the parts of your life along the way, there is always a chance to start over,” it states on his website. It’s this starting over that drives the ethos of some bands to not make their music sound stale with the passage of time, and to slowly evolve musically so as not to become stagnant and be reduced to one-hit wonder albums. Every album of the Sam Roberts Band had a different producer, and this one is no different. When one looks at that fact, it should be interesting to see what this release has to offer as the band’s creative juices were contained at The Tragically Hip’s The Bathouse Recording Studio in Kingston. The current incarnation of the five-piece band includes Sam Roberts (lead vocals, guitar), Dave Nugent (guitar), Eric Fares (keyboard, guitar), Josh Trager (drums), and James Hall (bass).

As I pull off an in medias res, I listened to the lead single “If you want it” when it hit online and I was immediately captivated by the ’70s-sounding organ opening (which threw me back to The Guess Who’s “These Eyes”) as the imposing drums followed, to which the listeners are treated with a slick bass riff, then followed by Roberts’ lucid vocals getting all dark on us by talking about a “necromancer..and the Gates of Hell.” It was a good plan to lead with this single to promote the album, as the lyrical hypnotic hook is very catchy with, “If you want it, If you want it, well, you’re gonna have to take it from me… If you want it, well, you’re gonna have to give me something, If you want it, well, I need to know: what’s in it for me?,” which, for me, signifies the beliefs of a fair amount of people these days. I also appreciated the lyrical rhyming scheme from the first verse to the second between the word necromancer, and the cosmic dancer. The album commences with “TerraForm” and its repeated hook “starting over” (which, I like to feel, symbolizes the band’s “starting over” on a new album), as Roberts’ radiant vocals saturate the track with a dreamy inertia. The album is mixed with a spectrum of pacing (slow, medium, and fast tracks), with an abundance of wicked bass riffs, and staccato guitar playing (which for me, was a little bit too much on some tracks), and engaging drumming. Synths can be found in the background of some songs (“TerraForm,” “Roll with The Spirits”), along with a mix of genres

with stadium Rock, wall of sound instrumentation (“Lake Effect,” “The House Inside”), to the more Bluesy “Black Spark” (with Roberts musically monologuing at the beginning), to the Top-40 sounding radiobility of “Ritual Dance” (watch it gallop!!!). The album ends with an-above average track in “Spring Fever,” a good choice for a bookend. Although Roberts’ echoed (Rogue Empire) vocal range isn’t really challenged (except for a few high bars on “Spring Fever”) throughout the album (as he settles into his comfortable, malaise range throughout the release), his delivery of phrases with simple rhymes do the job.

Sam Roberts Band fans will understand that TerraForm is far from the band’s former Rock guitar-heavy songs, but a more softer, electronic “stadium wall of sound” filling type of album. For me, there were no “bad” songs on this album, as I didn’t say, “damn, this track sucked.” Producer Graham Walsh’s electronic Rock fingerprints can be seen on this work as the electronic instrumental sounds (just like his other efforts with the band Holy F*ck) are littered throughout the album, which typically isn’t a Sam Roberts Band staple. This compilation does get better with multiple listenings, and props on the minimalist cover colour art and design (although I question the symmetry of the diamond drops and the mountain peaks, based on my OCD…LOL).

When interviewed about TerraForm, Sam Roberts is philosophical when he talks about the band, saying, “but we still have places that we have to go and we have music that we have to make. That is how we talk when we’re amongst ourselves,” The Province quotes him. If the band continues with its end goal in mind and its positive chemistry, then we’ll continue to hear some good music from it. Having moved away from the percussion and horns that dominated its last album, TerraForm brings forth a consistent, refreshing, evolving wall of sound that continues to add to the career canon of spanning hits that we have come to expect out of the Sam Roberts Band. Hopefully this transitional effort will set the stage for more musical breakthroughs in the future, thus building on its Canadian five-piece Alt Rock momentum.

Insert pretentious stuff about me here. I was born at a very young age. I am pretty, funny... without the comma. Easily distracte
RELATED ARTICLES
album reviewsif you want itsam roberts band
8.0