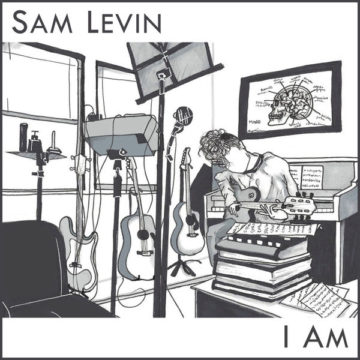 Sam Levin
I Am
Clarence Productions

Sam Levin has an infuriating amount of talent. At 16, he has the vocal range of a singer with decades of experience, he writes melodies which are as catchy as anything on the radio, and he has a clear understanding of which instruments will best serve each composition. On his latest release, I Am, Levin shows off all of his talents with an album that sounds heavily inspired by the mid-west emo genre which began long before he was born. Nonetheless, the hints of Owen, Sunny Day Real Estate, and Hawthorne Heights which can be found in Levin’s music will go greatly appreciated by fans of the genre. Despite a few hiccups on I Am, the album is an easy listen and mostly accomplishes what it set out to do.

Mike Kinsella of Owen and American Football may just be Sam Levin’s spirit animal. Although Levin’s approach to music is much more pop sensible, his vocal delivery and instrumentations which are soft on the ears is very Kinsella-esque. Levin’s second track off  I Am, “Carbon,” would be the best proof of this. However, “Carbon” is also the biggest exhibition of Levin’s vocal flexing. He clearly hits only the intended notes on the transitions from his vocal basement to falsettos seamlessly. If there is any auto-tune on the track it’s used in good taste and mostly transparent.

The main issue with I Am is the severe overuse of loops. For the most part, the soft instrumentation allows the loops to go on without being too annoying but by the final track “Everyone Goes,” they will certainly inspire some headaches and twitching eyes. Every track has some kind of one or two bar loop. Levin’s talent deserves better; he may find it in his best interest to get a band which would allow him to flesh out ideas and not have to use technology as a crutch.

Levin’s lyrics relay the messages he is trying to get out for the most part. He uses some simple metaphors and solid imagery in his songs but never strays too far into the obscure or complicated. On the track, “With Love And Compassion,” the lyrics fit particularly well with the feel of the music. The mix of wintery themes and rolled off guitar tones is very effective in putting listeners into a December mood. “First World Problems,” however, comes close to being incredibly tacky. The intent of the song is clear and clever. The theme of confusing reality with first world problems as a condition is carried throughout the tune. Yet, the very reason for using literary and poetic tools is so that a writer does not have to discuss banal things like meal prepping as he does on the track. The irony of the song is understood in that you cannot complain about a house having no food if you are able to make a sandwich, but the very use of the word “sandwich” in a song is enough to make the listener feel uneasy. The point is taken but the morale could be better served.

Levin has a bright future ahead of him. Given a few tweaks, he could take his musical career to a new level. However, it is also possible that Levin could take the pop route, becoming the new Justin Bieber, using more technology to candy coat his music, and writing lyrics silly enough for every boring soul to understand. He surely has the talent to do it anyway he pleases. Let’s hope he chooses to become a better musician and leaves a positive mark on the industry.

The Spill Magazine is a Toronto-based online publication dedicated to covering the independent music scene with a strong focus on our thriving hometown talent. Our writers bring you up-to-date news, in-depth features on musicians and reviews for the latest CD releases. We also travel to the front lines for all local festivals including Canadian Music Week and North by Northeast. Don’t forget to check out our Facebook and Twitter pages for all daily Spill updates.
RELATED ARTICLES
album reviewsi am
9.0