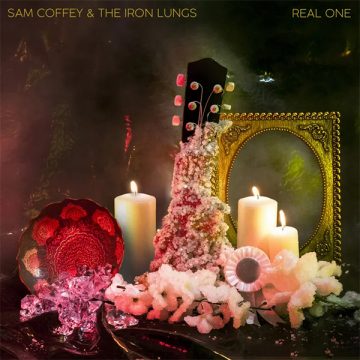 For its third album, Toronto’s Sam Coffey & The Iron Lungs has returned with Real One. The full-length record is their first major release since 2017’s acclaimed self-titled album and follows a string of singles which started in 2020 with “Back With The Gang”, and more recently, “Gates Of Heaven” and “What This City Needs”.

Real One opens in a larger-than-life fashion with the lead single, “Back With The Gang”. Driven by a thick wave of crunching guitars and an accenting synth, Sam Coffey & The Iron lungs kicks down the gates with a rocker that sounds as if AC/DC played pop punk and was fronted by Dave Grohl. This is followed by the most recent single, “What This City Needs”, an up-tempo power chugging glam punk rock banger. While neither “Back With The Gang” and “What This City Needs” are reinventing the wheel, they both give off the vibe that Sam Coffey & The Iron Lungs is having the time of their lives.

Throughout the course of its 11 songs, Sam Coffey & The Iron Lungs touches on elements of classic rock (the Cheap Trick-inspired “Sounds Alright”), pop punk, and contemporary indie rock (“Magic”), making Real One a record that demonstrates a strong degree of range in songwriting. Highlights on the album include the opening singles, the Springsteen-inspired odyssey, “Gates Of Heaven”, “She Knows”, and the slow burner of a closer, “Real One”.

Sam Coffey & The Iron lungs returns with a long-awaited album in a big way. Building off of its 2018 sophomore album, Real One does not mark a departure, but signifies a rich sense of growth for the band. As a result, Real One is a reflective album that strays from the punk-centered sound that has brought the band this far – for better or worse – while fleshing out elements and influences that where otherwise buried in their previous work to deliver a more conceptual artistic vision.

A passion for music has always been a part of Gerrod’s life. As a young boy, he was raised on a steady diet of the music from The Chili Peppers, Aerosmith, The Stones, Prince, and others from his mum. Raised in the GTA, Gerrod continued to foster his love for music by attending a wide range of concerts and learning the drums. His unapologetic passion for music has no bounds and has spread to a wide variety of styles, whether it be the 90’s rock that sound tracked his teenage years, the jazz he studied in university, or his newfound love for hip-hop. He recently received his bachelors in music and education from York University and is passionate about writing and reviewing good (and less than good) music. Gerrod is also the drummer and songwriter for a Toronto based rock & roll band, One In The Chamber.
RELATED ARTICLES
album reviewalbum reviewsback with the gang
7.0