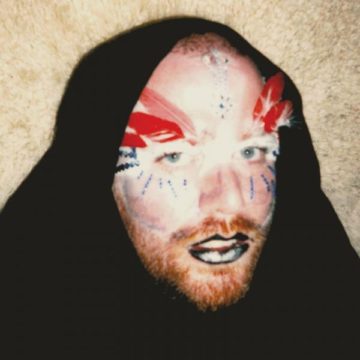 Opening with “Talk 2 Her”, the band’s current hit that is all over the radio, Sam Coffey & The Iron Lungs are setting the tone for the rest of the record. “Talk 2 Her” is a solid rocker with Coffey’s voice taking on the form of a howling Ramone as he melodically sings over crunching guitars and thrashing cymbals.  Instrumentally, while rooted in a glam punk fashion and little to do with the blues, the track also seems very much inspired by The Rolling Stones. This is only a testament to the song writing behind Sam Coffey & The Iron Lungs that they could manage to write a Jagger/Richards inspired tune without sacrificing their punk virtues. It is for these reasons that “Talk 2 Her” is my favorite track on the record, but rather than feel like it peaked too soon, the record continues to ride at a more or less equal high. Similarly, much of the album flawlessly blends together punk, pop, and rock traits to create a sound that is not only very modern, but very unique to Sam Coffey & The Iron Lungs. “Voicemail”, for example, starts off with a very 80’s dance inspired synth line while the following track, “Judy” features an incredibly poppy melody and rhythmic guitar part, as well as a pre-chorus that would fit perfectly with any of today’s top indie rock bands. All the while, Sam Coffey & The Iron Lungs pull in all together with style and flair.

What is most interesting about Sam Coffey & The Iron Lungs is the trilogy of songs near the end of the record, consisting of “Ragnarok (Trilogy Part I)”, “Teenage Release (Trilogy Part II), and “PhD (Trilogy Part III). The three songs take up roughly a third of the album and all share similar melodic and harmonic motions from within the songs, some of which are quite obvious, while others are far more subtle. Once again this demonstrates just how brilliant the song writing is on this record. Similar to “Jesus Of Suburbia” from Green Day’s American Idiot, really these three songs are really just one very long and progressive song which, just like most classical works, builds upon the previous step in a manner which continues to grow while frequently referencing what has already been done.  If you had the album on shuffle, all three of these tracks stand out as great, but they are not the greatest on the album.  Together, however, the three in succession of each other is simply brilliant and goes to show that punk rock can be more than bashing away at blisteringly fast speeds with fuzzy power chords.

“You Don’t Have To Be Nice” brings the album to a close, creating a full circle in a unique sense. Starting off acoustically, the song presents the strongest sense of synthesis between modern indie rock, with the signature Sam Coffey & The Iron Lungs blend of punk similar to The Ramones and The Cult as well as glam rockers of the likes of Cheap Trick and T. Rex. If this record is any indication, then Sam Coffey & The Iron Lungs is on a straight path to becoming one of Toronto’s most premier bands as they kick down the doors into the big time world of modern rock. This is an excellent album; one that is certain to become a major hit among both punk and indie rockers of today!

A passion for music has always been a part of Gerrod’s life. As a young boy, he was raised on a steady diet of the music from The Chili Peppers, Aerosmith, The Stones, Prince, and others from his mum. Raised in the GTA, Gerrod continued to foster his love for music by attending a wide range of concerts and learning the drums. His unapologetic passion for music has no bounds and has spread to a wide variety of styles, whether it be the 90’s rock that sound tracked his teenage years, the jazz he studied in university, or his newfound love for hip-hop. He recently received his bachelors in music and education from York University and is passionate about writing and reviewing good (and less than good) music. Gerrod is also the drummer and songwriter for a Toronto based rock & roll band, One In The Chamber.
RELATED ARTICLES
album reviewsburger recordsdine alone records
10