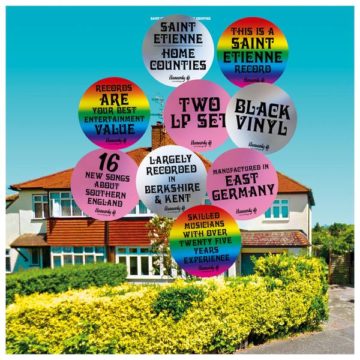 Saint Etienne is a trio, who have been recording music since 1991. Their eighth release, Home Counties is their first album since 2012’s Words and Music by Saint Etienne, and to say this album is highly anticipated would be putting it mildly.

This is a concept album of sorts. It is about the love/hate relationships one has with their home town.  It can be a big city, or a small town in a county, but the bottom line is your view of your hometown changes as you get older, and your perception at that moment. Of course, being British, they are more focused on post war communities that developed after World War Two, and these towns produced the music we listen to today.

The album is brilliantly structured as a radio show, with a stellar opening.  The opening track “The Reunion” begins with an announcer stating “This is radio four, and now “The Reunion”.  This kicks of the album, and sets the listener in the mind space of listening to a radio broadcast.  As such, the band covers several genres of music throughout the album.

Disco, pop, sixties, 1990’s dance music, and easy listening.  Quiz shows and sports reports feature in the mix to add to the overall effect. Although, this is not the first time this style has been attempted, (The Who did it in the 1960’s with The Who Sell Out) but they do it with style and in their own way. The overall concept works and makes for very interesting listening.

The songs, for the most part, are very strong and extremely melodic. Lead singer Sarah Cracknell sounds amazing and her breathy voice is perfect for the songs. Bob Stanley (keyboards) and Pete Wiggs (Keyboards) work well with Cracknell and produce beautiful arrangements.  Interesting fact, Wiggs and Stanley are journalists and writers (and in Stanley’s case a filmmaker, Wigs also D.J.’s). Their knowledge of music and music history (Stanley’s book Yeah! Yeah! Yeah!: The Story of Pop Music from Bill Haley to Beyonce is essential reading for anyone interested in the history of pop music) contributes to their abilities to cross so many genres.

The album concludes with the incredible summary “Sweet Arcadia” which has Cracknell beautifully narrating a history of the towns and cities, throughout England. Beautifully produced and sentimental without being morose.

The downside of this album is the length, 19 tracks is a lot of information and in one go it is a huge commitment.  Interestingly, the album plays like it should be listened to as a complete album, not a collection of songs.  Again,  a brilliant idea, but a bit too lengthy.

These three musicians are very talented, and the album is very good.  Fans will love it and it may attract new ones.  I just hope it is not another five years for a release from Saint Etienne. If there is another lengthy gap, we have Home Counties to explore and enjoy.

Born and raised in Whitby, Aaron discovered music through his love of The Beatles. This led to a career in radio, writing for various publications, and ultimately a radio show about The Beatles (Beatles Universe), which ran for over four years. When not immersed in music, Aaron enjoys spending time with the loves of his life -- his wife Andrea, and daughters Emily and Linda (all of whom have an intense love of music too).
RELATED ARTICLES
album reviewsheavenly recordingshome counties
8.0