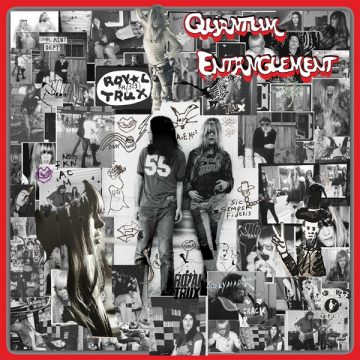 It was early 2019 when Neil Hagerty declared in the midst of an interview that he was leaving Royal Trux, the experimental garage rock band he formed in 1987 with then-partner, Jennifer Herrema. The announcement came on the heels of the release of White Stuff, the duo’s first studio album in 19 years, which coincided with a new contract and full-out digital catalogue reissue on indie label, Fat Possum, revealed in 2018.

Hagerty’s claim, later to be refuted by Herrema, was not the first indication of turbulence throughout the album’s promotion. Similar press mishaps and a chain of unclear Tweets from Hagerty left the status of the band shrouded in mystery. Regardless of fact or fiction, what ensued was the cancellation of a string of tour dates that had already been postponed once due to arrest issues.

This is just one chapter of a story that is as erratic as can be told about a band such as Royal Trux, a band that after a pioneering career and a critically-acclaimed comeback record, still does not seem to know what to do with itself. To have followed their story is akin to having watched a lengthy and arduous tennis volley. The match began long before the duo reunited in 2015 and back when they were swept up by Virgin Records in the wave of post-alt explosion major label signings in the mid ‘90s. After returning to Drag City through a corporate buyout scheme on their last contracted record, the band ultimately dissolved, their legacy defined by classic tropes of drug use and dysfunctionality.

Fast forward beyond their 2019 tour cancellation and Royal Trux have now released Quantum Entanglement, a new career-spanning compilation glossed up and sleeved as a Record Store Day coloured vinyl exclusive. While not technically a ‘greatest hits’, Quantum Entanglement serves its purpose by organizing some of Royal Trux’ most approachable cuts into a cohesive package. Album opener “I’m Ready” is a welcoming introductory rocker, while fan favorites such as “Sunshine and Grease” from 2000’s Pound for Pound and “Stevie” off of Accelerator showcase their unique hybrid of scuzzy psych-blues. More challenging listens, for example, those from the band’s first two albums, are understandably omitted in an effort to display Royal Trux in their most accessible fashion.

There is no doubt that Quantum Entanglement succeeds musically, though this sole success is built on what we already knew was great to begin with. Ultimately, it leaves one questioning its motive and the value, if any, it brings to the Royal Trux canon. While the album could serve as a great entry point for newcomers to the band, it misses this market in the form of a gimmicky, limited edition collector’s item, likely only catching the eyes of long-time listeners and those who’d already appreciated the Trux catalogue unadulterated.

In the end, let’s call Quantum Entanglement what it is: the dying breath of a doomed-to-fail reunion, while the band’s newest record label desperately mans the defibrillators.

Matt Gilberto is a Cleveland, Ohio native and music enthusiast with a soft spot for alternative and punk rock. Life for him began in middle school when he first heard Nirvana’s In Utero. He enjoys writing, photography, concerts and spending time with friends and family.
RELATED ARTICLES
album reviewalbum reviewsfat possum
7.0