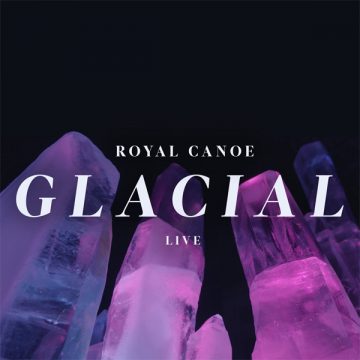 Royal Canoe is known for pushing boundaries of what we can imagine. Its music videos are surreal and its songs feature distorted vocals over layers of bizarre synths and creative percussion. If any band was to attempt a sub-zero outdoor show in the dead of Canadian winter, it was Royal Canoe.

Royal Canoe’s most recent EP, Glacial (Live), features five tracks recorded live during their January show at the Forks in Winnipeg, where temperatures frequently drop into the negative double digits. However, the band embraced the frozen aesthetic. Massive ice slabs filled their stage and all of their instruments were carved from ice blocks harvested from local rivers and ponds, with the help of Sputnik Architecture and Luca Roncoroni, the creative director for the Ice Hotel in Sweden. The “ice-struments” included a pitched ice marimba, ice percussion, an ice horn, and a sample kit using only sounds recorded with ice.

Alongside the EP, Royal Canoe published a documentary featuring the live performances. It is a fascinating glimpse into the hard work behind this project. During a planning session, frontman Matthew Peters advocates taking “the most ambitious, most difficult path… within reason”. Yet despite the challenges inherent in such a project, they pulled it off beautifully.

Aesthetically, the show looks stunning and the EP holds up well on its own. With songs spanning their last three albums, the re-imagined sound provides something new for diehard fans. In fact, the ice provides a beautiful, dreamy texture to the music, mellowing out the band’s experimental soundscapes. Surprisingly, a live EP of songs played with ice-struments in the dead of winter is one of Royal Canoe’s most musically accessible albums.