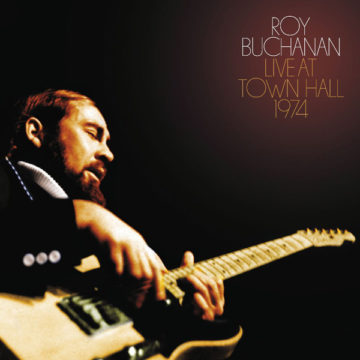 Roy Buchanan is one of those artists who seemed to just excel in front of a live audience. A true guitarists’ guitarist, he never had a strong desire to be a studio maverick. Buchanan just wanted to play. While his early studio LPs are all certified classics, 30 years since his passing it is his live sound is what he will be remembered for.

Live Stock, his first official live album released in 1975, is a glimpse of what a typical Buchanan show might have been during his glory days. However, the album only features eight tracks and doesn’t really give the listener the full extent of a live performance.  Now over 40 years later, we can hear the whole thing. Live at Town Hall, offers the listener the complete Live Stock show.

Over the course of the three-LP set, we can fully experience two full sets of Buchanan’s at the height of his career. It’s easy to picture a smoke-filled room reeking of stale beer and old sweat seeing ol’ stone faced Butch making his ’53 Telecaster squeal.

While Buchanan’s guitar prowess is at the peak of its powers, the music can suffer at times due to the occasionally trite singing, which can seem uninspired in parts. Billy Price, who provides the vocals here, sang on the majority of his ‘70s work but never quite had the power of Butch’s first singer, Chuck Tiley. Nevertheless, the ferocious guitar playing makes up for it. Tracks like “Too Many Drivers”, “Done Your Daddy Wrong” and most importantly “Roy’s Bluz” are pure brilliance.

As a child growing up in the suburbs, Ryan found music as a way to soothe his boredom. After first hearing AC/DC at the age of 10, he was hooked on music. Tracing its roots to the ‘50s, he became obsessed with Elvis, Buddy Holly and Chuck Berry. Somehow that led to grunge, then psych-rock, then jazz, etc. The list goes on and on and his collection of vinyl records continues to grow.
RELATED ARTICLES
album reviewalbum reviewsreal gone music
9.0