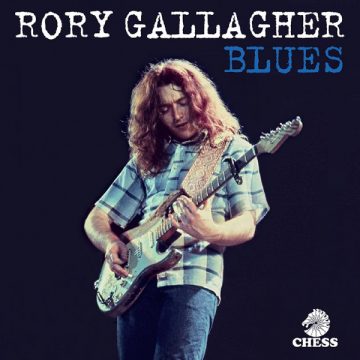 The aptly-titled Blues was a longtime coming from the Rory Gallagher organization. Nearly 25 years after his death, this is the genre in which he is most remembered for. While other blues-based rockers from his era branched out into more commercial forms of music, Rory always stayed true to his roots and never sold out.

Having Universal releasing this under the now defunct Chess Records division, it is clearly an honour that ranks Gallagher with his blues heroes like Howlin’ Wolf and Muddy Waters who once made it the premier R&B label.

Blues has been compiled in three formats as a single-disc CD, double-LP set and a triple-disc deluxe CD collection. The single disc CD/double-LP format will most likely be the most popular versions; however some of the best material is left out. It is only on the three-disc set that you can hear the full range of gorgeous acoustic arrangements that Gallagher has left us.

The album starts off a little shaky with three electric blues numbers. Rory’s guitar work is superb as always, however it is easy to see why these tracks were never included on any of the studio releases they were recorded for. The tracks are often uninspired, which is quite unfortunate given Gallagher’s usual energy. There’s just the overall vibe of Rory and company going through the motions.

Where Blues really shines though is on Gallagher’s acoustical work. “I Should’ve Learned My Lesson” recorded for his 1971 release Deuce, finds Gallagher dishing out delicious licks on his Martin D-35. “Secret Agent” is also another highlight on this compilation as we hear this beauty get the stripped down Dobro treatment, an instrument Rory wielded like no other. The recording was taken from a mid-70s television appearance and completely blows away the electric studio version included for Calling Card. “Secret Agent” yet again proves that Gallagher was an unstoppable force when performing live.

“Prison Blues”, originally intended for Blueprint, has Gallagher showing us his inner Lead Belly and it’s a wonder this track did not make the final cut. Blueprint, not one of his stronger releases, could have benefitted greatly from this beauty.

With Gallagher’s posthumous cannon lagging in recent years, Blues comes as a delightful surprise for ‘70s blues-rock fans. While this album is not as consistent as something like The Beat Club Sessions released in 2010, it will certainly be appreciated by Rory Gallagher devotees.

As a child growing up in the suburbs, Ryan found music as a way to soothe his boredom. After first hearing AC/DC at the age of 10, he was hooked on music. Tracing its roots to the ‘50s, he became obsessed with Elvis, Buddy Holly and Chuck Berry. Somehow that led to grunge, then psych-rock, then jazz, etc. The list goes on and on and his collection of vinyl records continues to grow.
RELATED ARTICLES
album reviewalbum reviewsblues
8.0