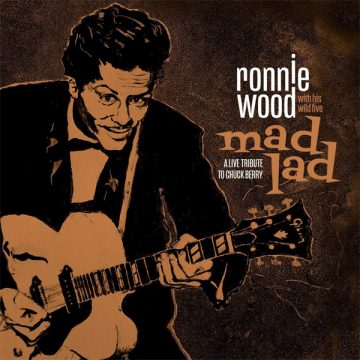 Back in the early to mid ‘60s, Chuck Berry was virtually deified in Britain. There were long debates about whether he was “rhythm and blues” or “rock ‘n’ roll” – these things mattered, particularly if you were an R’n’B loving “mod” squaring up to a rock ‘n’ rolling leather-clad “rocker” on a South Coast Beach. Chuck may not have united the two factions, but both appreciated his music. He toured the UK frequently at the time, forging himself a new audience after the teenage rock ‘n’ rollers of the ‘50s had moved on, and arguably one which has ultimately had even more impact. He was, indisputably, one of the major figures of the last century.

Chuck’s songs were at the forefront of the repertoires of any beat band worthy of the name, Bob Dylan called him “the Shakespeare of rock ‘n’ roll”, and even Peter Tosh of The Wailers covered Chuck in a reggae style. He was a cornerstone of popular culture – think of Marty McFly playing ‘Johnny B. Goode’ in the movie Back To The Future, and that same song winging its way into interstellar space thanks to its presence on the Voyager spacecraft. Nice to think that some civilization’s first contact with mankind might be dancing to Chuck! And of course, both The Beatles and The Rolling Stones sang the man’s praises – but more particularly the latter. Which of course is where Ronnie Wood comes in, having been a member of that band since 1975. But he was aware of Chuck way before that.

Recorded live in 2018 at The Tivoli Theatre in Wimborne, in the deep south of England, and featuring female singer Imelda May (try “Rock ‘N’ Roll Music”, or “Wee Wee Hours” for something slower) and pianist Ben Waters helping out, the set opens with Ronnie’s own tribute to Chuck, mentioning his foibles such as always wanting to be paid in cash or meeting the pick-up backing band more or less as the show began – but it’s an affectionate tribute before the show moves into a rocking “Talkin’ ‘Bout You”, which shows both what Chuck was all about, and that Ronnie certainly intends to do the business. To answer the question in that first paragraph, Ronnie selects rockers like ‘Little Queenie’, blues such as ‘Worried Life Blues’ (at nearly five and a half minutes, this is by far the longest track here!) and plenty of all-time classics. As always, he did the cover art himself.

If you like Chuck, The Stones, ‘50s and ‘60s sounds, or just good rocking music, do check it out.

The Spill Magazine is a Toronto-based online publication dedicated to covering the independent music scene with a strong focus on our thriving hometown talent. Our writers bring you up-to-date news, in-depth features on musicians and reviews for the latest CD releases. We also travel to the front lines for all local festivals including Canadian Music Week and North by Northeast. Don’t forget to check out our Facebook and Twitter pages for all daily Spill updates.
RELATED ARTICLES
album reviewalbum reviewsbmg
7.0