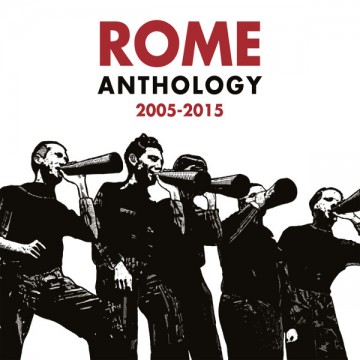 If Jérôme Reuter is two things and two things only, they are these: political and reflective. The leader of Rome (not to be confused with Caesar, Nero, Caligula, et al) is known for outspokenness on certain issues, cancelling concerts if need be just to make a point – one such concert was in February of 2013 where a Facebook post later explained a reticence to be “affiliated to bands promoting racist or homophobic views of any kind” as the key reason. This is but one bristle on the brush of political discourse that Rome are a part of, but it helps frame their work. This isn’t just neo-folk, this is political neo-folk. And quite rarely does political music sound this haunting and infectious. As for reflectivity, almost every song on this sprawling anthology looks back with austerity at times of hardship and struggle. Though many styles are explored over this roughly chronologic collection, it is this political, reflective impetus that lingers on long after track 20 fades to black.

There’s an abundance of booming drums, suspended acoustic guitars and deep, breathy vocals almost everywhere on this thing. And the music paints a (mostly) bleak picture, but that’s the point. If you’re looking for something to listen to while planning a revolt on an oppressive regime, look no further. While most of the twenty tracks stick to the standard sulking neofolk tropes, there are a handful that experiment delightfully with varied instrumentation and direct narratives.
Five tracks in, listeners are treated to the ironic military drumming on “Der Wolfsmantel” which is complimented by fuzzy speech samples, cock-a-doodle-doos and a haunting pseudo-chorus of “remember you’re unique, just like anybody else” and “beware the charm of power”.

The speech samples return again on “A La Faveur De Le Nuit”, this time overlaying rusty doors, dwindling violins and barking dogs – at this point the speech-sample motif began to wear this listener thin as song after song deployed the same method of insta-politicizing.

“Amsterdam The Clearing” is one of the album’s more upbeat tracks. The psychedelic ear-to-ear breakdown emanates ferocity, and the track concludes with an explosive pop, like a machine sputtering to death.

The piano riff on “Das Feuerordal” add much needed colour to the bleakly conjured lyrics that mention the “burden of saintliness” and “temptation to kneel”. Its tracks like this that are most reminiscent of post-punk group Protomartyr, though more in aesthetic than mechanics.
The vivid “Years of Abalone” matches the anti-military, pro-revolution lyrics with a vibrant electronic loop that melds with a flitting accordion at the halfway mark – this is perhaps the most ludicrous track on the album.

Just as the remugient begin to tire, the track “One Fire” unleashes one more bought of protest. It’s hard not to feel invigorated when the Shakespearian chant of “One fire drives out one fire; one nail, one nail; Rights by rights falter, strengths by strengths do fail” is taken up.

The middling “Pornero” sounds like a sullen version of Ennio Morricone’s “Man With Harmonica”, and the church bells on “Torture Detachment” swell in with the warmth of a Nicolas Szczepaniak track before segueing back into the scornfully confrontational lyricism that peppers most of this album. This is immediately followed by the funeral march “Families of Eden”, the plucky acoustics of “Neue Erinnerung” and finally the lukewarm closer, “My Traitor’s Heart”.

An ethos of despair and hope lines these songs, but like most neofolk, tracks that aren’t overtly mutinous tend to wander wide-eyed into fields of monotony. Thankfully, lifelessness coupled with a lack of sonic development kills only a handful of tracks. In the end, this is decidedly Politick music steeped in a humanistic tradition. The thumping and bellowing amounts to something triumphant, geared to express a back-against-the-wall, chest-forward movement.

The vocal delivery, which mimics that of a sullen Michael Gira, brings about necessary comparisons. In 1991 Swans released White Light from the Mouth of Infinity, which to this day may stand, alongside Dead Can Dance’s Within the Realm of a Dying Sun (1987) and Current 93’s Thunder Perfect Mind (1992), as the true contender for neofolk’s greatest offering. But, in the two and a half decades since these masterpieces were released, has Rome offered anything different? I say yes, though not with much conviction.

While this album doesn’t deviate significantly from the deep rooted neofolk tradition, it does present a decade’s worth of fantastic material. 2009’s Flowers From Exile is likely Rome’s magnum opus, but they successfully gather songs from almost all of their works in this anthology, showcasing the consistent quality of their output, and that’s something worth taking pride in.