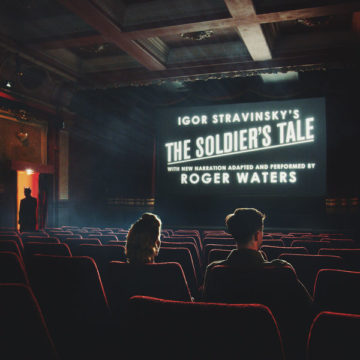 In 1917, while the First World War continued, Igor Stravinsky composed the music for L’Histoire du soldat (The Soldier’s Tale) with the text being written by Charles Ferdinand Ramuz. It was translated into English by Michael Flanders and Kitty Black, and tells the tale of a Russian soldier, on leave, meeting and eventually making a deal with The Devil. It was intended to be performed with a septet and three actors (The Soldier, The Devil and The Narrator) and debuted in Switzerland in September 1918, two months before the Armistice at Compiègne, ending World War I.

Flash forward 100 years, as we approach the centenary of the end of World War I, and Roger Waters has resurrected this rather obscure classical piece in honour of Remembrance Day. Waters has a personal connection to both World Wars, and has written a great deal about them and the impact they had on his family. 1979’s The Wall is just one example. His grandfather was killed in World War I and his father in World War II. Waters obviously embraced this parable and in 2014 started work on it with The Bridgehampton Chamber Music Festival (BCMF) Musicians in Bridgehampton, New York. It is obvious that this is a very personal project for Waters.

Waters has adapted the original text, made the soldier British, and plays all three parts. There is no singing, no new Waters songs, this is his version of this classical piece. It is not his first foray into classical music. In 2005 he released his opera, Ça Ira (French for “It will be fine”, and the opera was subtitled “There is Hope”). Let us be honest, a great many songs from Waters, either with Pink Floyd or solo, are on the cusp of being classical. The music on this album was written for and is played by a septet. Waters remains pretty faithful to the original musical arrangements.

What we learn from listening to The Soldier’s Tale is that Waters may have missed his calling. His voices, and really his acting, is outstanding. He develops characters simply by the use of distinct accents. Waters is perfect as The Narrator, but it is when he gets into the characters that his true talent shines. His anger, humour, and pathos all come out throughout the work. It really is quite an accomplishment.

The band shows excellent musicality and instrumentation, and provide the perfect soundtrack for Waters. The music is arranged in such a way that it is not a distraction, but rather augments Waters’ words. BCMF are able to translate this complicated classical piece and incorporate many styles within the performance itself with ease. The recording, itself, is astounding and sounds fantastic.

The Soldier’s Tale may not be the actual followup to 2017’s Is This The Life We Really Want?, but it would be the perfect one to that album. Waters’ albums have a theme, a common theme that is found throughout all the albums he has released throughout his career. He struggles with man’s inhumanity to man. He uses war as the ultimate symbol of this, and where Is This The Life We Really Wanted? focused on Trump and where America has gone wrong, it still focuses on man’s inhumanity to man. It just so happens that he has had personal experience in this struggle as well. So although fans may be a little surprised when they slip this album onto their turntable, it makes sense in his catalogue and career. It is the perfect followup to his last studio album.

This is an important album for many reasons, not the least being it demonstrates Waters’ many talents and creativity, but it is also important given the anniversary of the Armistice on November 11, 2018. It has been 100 years and I am sure Waters would ask “what have we learned?” This album is his attempt to contribute to that answer.

Born and raised in Whitby, Aaron discovered music through his love of The Beatles. This led to a career in radio, writing for various publications, and ultimately a radio show about The Beatles (Beatles Universe), which ran for over four years. When not immersed in music, Aaron enjoys spending time with the loves of his life -- his wife Andrea, and daughters Emily and Linda (all of whom have an intense love of music too).
RELATED ARTICLES
album reviewalbum reviewsroger waters
9.0