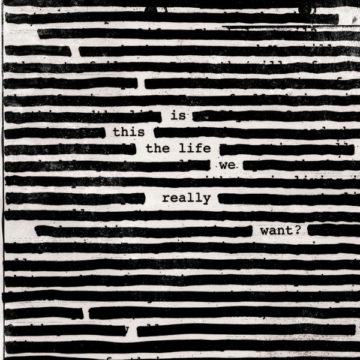 Roger Waters
Is This The Life We Really Want?
Sony Music

Roger Waters, one of the most consistently strong songwriters to emerge from the booming 1960s British invasion rock scene, has returned with Is This The Life We Really Want?, his first album since 2005’s Ça Ira.  A lot has changed in the world, both musically and politically, in the twelve years in which the Pink Floyd founder and one of rock’s most outspoken and prolific front-men has been absent from the business of record making. In some ways, with the odd exception, rock music has become rather passive in regards to political and social issues. Similarly, most musicians who got their start around the same period as Waters, again with the odd exception, have stopped releasing new music, or continue to release the rare album here and there, each running on nostalgic fumes in an attempt to leave their audience digging through their back catalogue, rather than attempting to be innovative. Is This The Life We Really Want? is the exception to both of these sadly common trends, proving once again, that Roger Waters’ creative mind is just as sharp as his razor tongue.

Is This The Life We Really Want? opens with a muffled voice over, along with a ticking clock and a steady heartbeat, until Waters breaks through the mud in what can be described as a biting and bitter introduction, which begs the listener to open his or her heart and search for the hard truths as to where we personally and socially are now. In tone, Waters sounds like he is voicing over a trailer for a major film in which he is the sole survivor, willing to lift his guitar high in the air for the sake of justice. He sounds angry, determined, and confident in the fact that he very well may be one of the last classic rockers who is willing to write such a timely and prolific album to address the world in 2017. This introduction, “When We Were Young”, leads seamlessly into the musical equivalent that is “Déjà Vu”, a song brimming with frustration, reminiscing, and sorrow, and Waters’ voice perfectly captures the vulnerability, and at times fear, that is felt across the globe in such uncertain times.

The music across Is This The Life We Really Want? is very simple, and often minimalistic.  Like much of Waters’ career, in and out of Pink Floyd, nothing is all that complicated, and this is where the music shines most. Waters is a master at writing simple songs that communicate, and at times even demand, a deep emotional connection or response from the music. Is This The Life We Really Want? is no different that that. “Picture That”, one of the album’s most standout tracks, is a testament to the fact that Waters tackles such controversial issues as the likes of the social consequences of conflict in the Middle East, American gun violence, greed and corruption among politicians and the upper elite, and “the leader with no fucken brains”, Donald Trump. The song, like anything Waters sings across the record, commands your attention and leaves you hanging on his words, anxiously awaiting what will come next from his smooth yet gravelly voice. While minimal, the effects used in post-production are reminiscent of Waters’ work with Pink Floyd, and there is a certain jazz sensibility to the album that sparks a feeling of improvisation, tension and release. It is this element that links Is This The Life We Really Want? to David Bowie’s swansong, Blackstar, and is best heard on the record’s title track, “Is This The Life We Really Want?”, “The Most Beautiful Girl In The World”, and the classically charged groove of “Smell The Roses” — a track which truly taps the Pink Floyd vein for a tastefully retro energy.

Through my numerous play-throughs of the album, there was nothing that I would want differently. To put it bluntly, Roger Waters is a genius and Is This The Life We Really Want? can stand among some of his best work.  From the beautiful acoustic ballad, “Part Of Me Died”, to the thrilling title track, which feels like a sleek soundtrack for an espionage movie and stands out for its brilliant minimalism and inspiration from Bowie’s “Blackstar”, Waters remains one of the most prolific artists by delivering one of the sonically best albums of the year, and what may be among the most socially important albums of the decade, along with Kendrick Lamar’s To Pimp A Butterfly.  Is This The Life We Really Want ?is a flawless modern masterpiece that will be revered as a shaper of music to come, and as a perfect demonstration as to how artistry and protest can come together in a seamless fashion in which they play off of each other to create a bigger and better statement than either could never make on their own.

A passion for music has always been a part of Gerrod’s life. As a young boy, he was raised on a steady diet of the music from The Chili Peppers, Aerosmith, The Stones, Prince, and others from his mum. Raised in the GTA, Gerrod continued to foster his love for music by attending a wide range of concerts and learning the drums. His unapologetic passion for music has no bounds and has spread to a wide variety of styles, whether it be the 90’s rock that sound tracked his teenage years, the jazz he studied in university, or his newfound love for hip-hop. He recently received his bachelors in music and education from York University and is passionate about writing and reviewing good (and less than good) music. Gerrod is also the drummer and songwriter for a Toronto based rock & roll band, One In The Chamber.
RELATED ARTICLES
album reviewsis this the life we really want?pink floyd
7.0