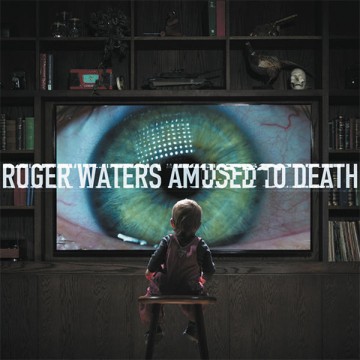 In the years immediately following his estrangement from his Pink Floyd band mates, Roger Waters’ musical career took a strange turn. While asserting (in a song lyric) “This is my band,” he began to release albums that – while they admittedly featured some fine musicianship – were short on hooks, melody, and memorable tunes. His first two proper solo albums – 1984’s The Pros and Cons of Hitchhiking and Radio K.A.O.S. from 1987 – did reasonably well in the marketplace, but that success was arguably based more on Waters’ notoriety as a former member of Pink Floyd than on the appeal of the music.

By 1992, Waters had sharpened his musical efforts, creating and releasing Amused to Death, the best of his post-Floyd studio albums. Like his previous records (and, one could argue, all Pink Floyd albums as far back as 1972’s landmark The Dark Side of the Moon), Amused to Death is a song cycle built around a concept. The idea here is the pervasive and corrosive effect mass media has upon its consumers.

With a sound that recalls The Final Cut, Waters’ last record with Pink Floyd, Amused to Death is flawlessly recorded and produced. Waters’ voice – a decidedly limited instrument – is presented in its best context, among copious three-dimensional-sounding sound effects and expansive instrumentation.

Released as a (non-charting) single, “The Bravery of Being Out of Range” features Waters’ croaking sing/speak vocal approach. Though it takes more than a minute to get going, “What God Wants, Part I” is among the album’s most effective pieces, distilling Waters’ lyrical concerns into a song with a martial beat that recalls the darkest moments of The Wall. But at the same time, the tune reveals a rarely-seen side of Waters: humor, though of a sardonic variety.

Waters’ sense of humor (if that’s what’s at work here) crops up again on the intro to “What God Wants, Part III,” with sounds and textures that quote explicitly from two classic Pink Floyd tunes, “Shine On You Crazy Diamond” (from 1975’s Wish You Were Here) and Meddle’s side-long epic, “Echoes” from 1971.

Waters’ nearly spoken narrative technique and the extensive use of ambient soundscapes are a two-edged sword: taken together, they help move the story (such as it is) along, but taken strictly as music, the approach is less effective. Still, there’s no denying the beauty of the sweeping strings and vocal choruses on “Late Home Tonight, Part I,” easily some of the prettiest music ever to come from Roger Waters. More musically varied than whole sections of The Wall, and even better produced than The Final Cut, Amused to Death stands as the high point of Roger Waters’ solo career. And in its newly remastered version, the disc presents even better sonic clarity and definition.

A long list of musical collaborators worked with Waters on the disc, including longtime associate Andy Fairweather-Low, Toto’s Steve Lukather, guitar master Jeff Beck, and Madonna collaborator Patrick Leonard. Despite Amused to Death‘s long and varied credits list, the finished product is a cohesive whole. Perhaps significantly, in the ensuing twenty-three years, Waters hasn’t followed up Amused to Death with a new studio album, preferring instead to release live albums focusing on his Pink Floyd-era music, and a well-received 2005 opera, Ça Ira.

With a background in marketing and advertising, Bill Kopp got his professional start writing for Trouser Press. He rose through the ranks at Skope Magazine, eventually becoming Editor-in-chief. When that magazine ceased publication, readers and associates encouraged Bill to start a blog. Musoscribe launched in 2009, and has published new content every business day since then. The interviews, essays, and reviews on Musoscribe reflect Bill's keen interest in American musical forms, most notably rock, jazz, and soul. His work features a special emphasis on reissues and vinyl. Bill's work also appears in many other outlets both online and in print. He also researches and authors liner notes for album reissues, and co-produced a reissue of jazz legend Julian "Cannonball" Adderley's final album.
RELATED ARTICLES
album reviewscolumbia recordslegacy recordings
9.0