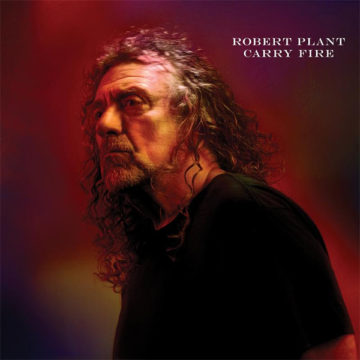 Robert Plant is one of rock & roll’s biggest cultural icons. His work with Led Zeppelin between 1968 and 1980 made him one of the genre’s most legendary figures, making him a true voice of a generation and pioneer of the hard rock genre of the 1970’s. While his work with one of the greatest bands of all time often overshadows his career as a solo artist. His newest and eleventh solo release, Carry Fire, continues Plant’s collaboration with The Sensational Space Shifters, Plant’s backing band who we first heard from on 2014’s Lullaby And The Ceaseless Roar and later on Robert Plant presents Sensational Space Shifters (Live in London ’12). In tone, Carry Fire continues in a similar direction as Plant’s recent work, further demonstrating a song writing style that is both matured and sophisticated.

Carry Fire is a soft album, driven by rich acoustic textures that allow for Plant’s vocals to soar around as he displays a vocal range and strength that is impressive for anyone, let alone a sixty-nine year old man. Whether it is the long cries of “Bones Of Saints”, his gently moving melodies of “Season’s Song”, or his melancholic whispers on the album’s brilliantly haunting closing track, “Heaven Sent”, Plant’s vocals are simply incredible and quite versatile and rather than being hindered with age, Plant has developed gracefully over the course of his near fifty year career.

Musically, Carry Fire is a very artistic record. The Sensational Space Shifters are a solid band who perform minimally when needed- “Heaven Sent” and “Dance With You Tonight”- and can shift into a much more involved force, as heard on the intricate guitar weaving of the record’s opening number, “May Queen”- a track that is greatly inspired by the acoustic and folky side of Zeppelin. While much of the record is driven by soft instrumental backing Plant’s vocals, when the band does take a heavier approach, the songs benefit that much more.  “New World…” for example is led by a light crunching electric guitar and thumping of the bass, while “Bluebirds Over The Mountains” makes use of fuzzy bass, guitars, and synths that are paired with a rhythmic flair.  The song is not only among the best of the album, but it is in itself a career spanning track that captures a strong Zeppelin vibe- texturally, as well as in feel with the songs funky and slightly off-beat pulse- while also remaining true to the style of Plant’s recent work, fitting seamlessly within the context of Carry Fire.

While Robert Plant’s latest solo career may not be the return to his classic rock roots as some fans may have hoped, it is a record that solidifies the latter portion of his career as one of rock’s most contemporary artists. The song writing throughout the album is subtly genius as Plant and the Sensational Space Shifters experiment with fusing acoustic and electric textures together to make a record that is incredibly creative and artistic. Songs like “Bluebirds Over The Mountains”, “Heaven Sent”, “Carving Up The World Again… a wall and not a fence”, and “Carry Fire” are examples of Plant’s masterful artistry as both a phenomenal singer and songwriter, making Carry Fire a visionary record, illustrating Plant as one of the most prolific musicians from the 1970’s whose career has continued to transform brilliantly as time goes by.

A passion for music has always been a part of Gerrod’s life. As a young boy, he was raised on a steady diet of the music from The Chili Peppers, Aerosmith, The Stones, Prince, and others from his mum. Raised in the GTA, Gerrod continued to foster his love for music by attending a wide range of concerts and learning the drums. His unapologetic passion for music has no bounds and has spread to a wide variety of styles, whether it be the 90’s rock that sound tracked his teenage years, the jazz he studied in university, or his newfound love for hip-hop. He recently received his bachelors in music and education from York University and is passionate about writing and reviewing good (and less than good) music. Gerrod is also the drummer and songwriter for a Toronto based rock & roll band, One In The Chamber.
RELATED ARTICLES
album reviewsled zeppelinnonesuch records
8.0