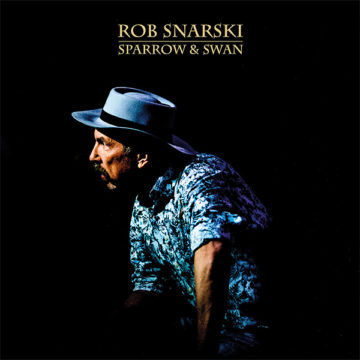 Rob Snarski is based in Melbourne, Australia, and he has developed his own distinct sound, both vocaly and guitar playing (he refers to as ‘rudimentary’). Sparrow & Swan is his first solo album since 2015’s Low Fidelity (Songs By Request Vol. 1), which was an album of covers. In between he did work with his day job, the band The Black Eyed Susans, but here Snarski has produced a remarkable album that bridges folk and so much more.

Helping him out on Sparrow & Swan is the fantastic Rebecca Barnard (Broads) who provides the perfect vocal balance for Snarski. He has also assembled a core backing band consisting of Kiernan Box (piano), Ben Franz (double bass), Rosie Westbrook (double bass) and Ben Wiesner (drums, percussion). While others contribute, they sound as if they have been together forever and complement Snarski’s distinct style.

Sparrow & Swan is a folk album, but to try to fit it into one genre does not do it justice. Snarski layers sound and uses his voice as an instrument. Listen to “All God’s Creatures” and the interplay of Barnard and Snarski is inspirational. Co-producer Shane O’Mara (who worked with Snarski on his previous solo album) knows how to focus on his strengths and the result is an incredible album.

These are little stories rather than songs. Listen to the heartbreaking song “Equine Dreams”. With lyrics such as:

“First he lost his job, then he lost his friends
The he lost himself to wine and gin
Dreams fade away and hope runs dry.”

This is poetry. You must hear it to have the full impact.

The songs/stories fit together and in the end it is like reading an excellent book of short stories.

Sparrow & Swan is a brilliant album. Enjoy it one sitting, you will get more from it. Snarski has produced his best work to date and one of the best albums of the year.