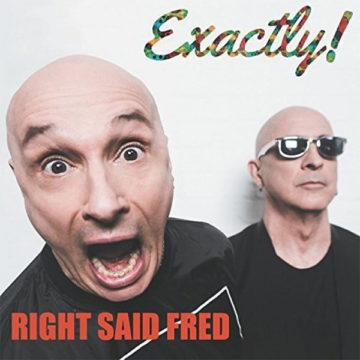 And their first album since 2011’s Stop The World, which many assumed would be their last.  Thankfully it was not, and they have assembled their strongest album to date.

I think it is safe to say that they are known in this country as a one hit wonder.  This is a shame, as they have issued several excellent albums throughout their career.  They are not a one trick pony, and produced some unexpected moments in their music catalog (check out their cover of Peter Sarstedt’s,  “Where Do You Go To My Lovely”  On this album, they seem like they have little to prove and want to make their own music.This album is a more mature Right Said Fred, but Exactly! still has their trademarkby dance melodies combined with (at times) silly lyrics.

But that is only a small part of this album.  Working and writing with Paul Statham (who founded the much overlooked but brilliant 80’s band, B Movie as well as working with Peter Murphy for many years) brings a bit more edge to the music, both in music and lyrics.  He is a welcome addition to this project and seems to have freed Right Said Fred and lets them explore different forms and sounds.  Listen to “Only When We La La Love”, which although a great dance song, has some dark moments in it.  The piercing keyboard stabs at you and you feel  the frustration of the singer.  Brilliant.

They work with others as well on this album,  Jason Glover brings out a very different side to Right Said Fred with the standout song, “I Don’t Wanna Die Right Now”, which seems to tap into a Leonard Cohen vibe.  Interesting and a welcome addition to the album.

Marcella Detroit (of Shakespears Sister fame as well as some fine solo albums) joins the lads for a rousing duet on “American Girl” which alone is worth the price of admission. Their voices blend together in a beautiful playful and soulful way.  They should consider this a single, it could be remixed for clubs with little effort.

The album closes with one of their strongest ever songs, “It’s Raining in England”  “I’m not sure if crime don’t pay, I’m not sure if religion saves”, sings Richard, “But, I know it’s raining in England” he concludes.  Fred provides some stellar guitar (he is one of the most underrated guitarists/musicians I can think of)  over a piano based, almost hymn like song.  It is an astounding work.

This is a very solid album, and an album where Right Said Fred expand, and explore.  I am hoping this a new phase for these guys and I think working with a new cast of characters has inspired them to create this terrific album.  They are now at a stage where they record for their own label (Absolute, distributed through Universal Music) and call the shots.  This means they can do the unexpected and branch out to different forms of music.  Exactly!, indeed!

Born and raised in Whitby, Aaron discovered music through his love of The Beatles. This led to a career in radio, writing for various publications, and ultimately a radio show about The Beatles (Beatles Universe), which ran for over four years. When not immersed in music, Aaron enjoys spending time with the loves of his life -- his wife Andrea, and daughters Emily and Linda (all of whom have an intense love of music too).
RELATED ARTICLES
album reviewsexactly!fred fairbrass
8.0