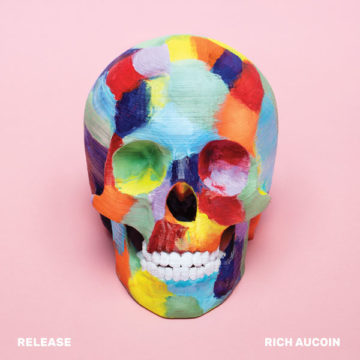 Rich Aucoin’s name seems almost synonymous with positivity. He has toured his music across countries by bicycle to raise funds for mental health and childhood cancer, and his live shows are famous for their infectious energy — even reluctant concertgoers would likely find themselves jumping up and down shouting lyrics like “In times like these, I wanna be a believer”  while being rained on with confetti. His previous albums all possess a good amount of this pump-me-up energy.

Aucoin’s brand-new full-length album, Release, shares some similarities—it has an indie pop sound at parts and is synched to Disney’s animated film Alice in Wonderland (similar to how he has synched his previous albums to films), and features himself on vocals and most instruments while also employing guest artists, such as Dan Mangan, Maylee Todd and Joseph Shabason. But he takes more risks lyrically and stylistically with this album; he’s confronting the idea of mortality, and goes into a much deeper and more introspective place.

The opening track, “The Base,” is a short, existential spoken-word piece, quickly setting the tone. “The Dream” has a lush and, well, dream pop-sounding intro reminiscent of Air, before bringing some more traditional pop elements in. The shoegazey, fuzzy sounds brought to this album (“The Fear” is another example), played alongside the pop, add an extra layer of depth. Tracks like “The Middle” are more up-tempo, like in Aucoin’s previous work, but there’s something slightly unsettling (yet perfectly fitting) about dancing to music while singing lyrics like “When I saw my face look at me, I knew my worst enemy.”

Release is somehow both satisfying and intriguing, and it doesn’t diminish any of Aucoin’s positivity; it only proves there’s more to his creations than meet the eye. The experimentation with genre works, and I’m very curious where he’ll take us next.

The Spill Magazine is a Toronto-based online publication dedicated to covering the independent music scene with a strong focus on our thriving hometown talent. Our writers bring you up-to-date news, in-depth features on musicians and reviews for the latest CD releases. We also travel to the front lines for all local festivals including Canadian Music Week and North by Northeast. Don’t forget to check out our Facebook and Twitter pages for all daily Spill updates.
RELATED ARTICLES
album reviewalbum reviewshaven sounds
8.0