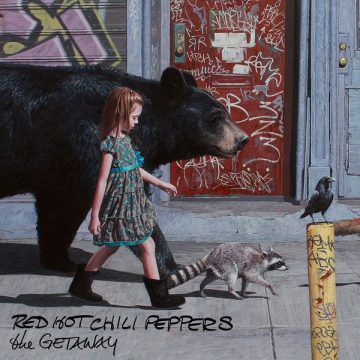 After a five-year wait, the Red Hot Chili Peppers are back with their 11th studio album, The Getaway.

The title says it all about this one as the band is changing musical direction, getting away from their old sound and trying to break new ground. Their shift in musical direction is heavily influenced by their newly recruited Danger Mouse who is replacing veteran Chili Pepper producer, Rick Rubin.

Their signature Funk-Rock sound has almost completely faded away and has been replaced with a modern, Pop vibe. While Blood Sugar Sex Magik-era fans will cringe at the thought of the Chili Peppers playing sugary pop, it proves that the Chilis aren’t afraid to explore new territory.

The Getaway draws certain parallels to Led Zeppelin’s In Through the Out Door in that they are both Pop records made by aging Rock bands. The latter, while it had a few catchy singles, is somewhat of a controversial piece in an otherwise impeccable discography. Though the Chili Peppers’ discography is certainly not perfect (their 1984 self-titled album along with I’m with You were spotty to say the least), this album might be the one that stands out as the bands biggest misstep.

The debut single “Dark Necessities” was definitely a poor choice to represent the album. It is banal at best. The only thing saving this song from becoming a total waste of listening space is Flea’s basslines, which are always a delight to hear.

On the other hand, the title track is actually quite pleasant and should have been the lead single. It’s Bubble Gum Pop to the max, but somehow in its cheesiness it works. And maybe it’s better that they stay in the Pop realm for now on because it’s clear they are having trouble with writing a decent rock song. “We Turn Red” is both musically and vocally predictable. After hearing this track it’s hard to believe that this is the product of the same band that produced “Give it Away” and “Suck My Kiss.” Even the Punk-Rock-influenced “This Ticonderoga” sounds like the band is trying to hard to find something lost a long time ago.

Part of what plagues The Getaway is singer Anthony Kiedis. While he was never a great lyricist, he always had an uncanny ability to write catchy songs. Even on the band’s previous record, the mediocre I’m with You, he had some great vocal melodies. Here Kiedis sounds the same on every damn track. His apparent lack of interest in singing is bogging down some otherwise interesting songs like “Go Robot” and “Sick Love,” which is reminiscent of Elton John’s classic “Bennie and the Jets.”

It’s hard to say whether or not the Chili Peppers have passed their expiration date or not, but The Getaway is certainly proof that they don’t have much gas left in the tank. While it’s great that they’re still trying to change it up musically after 33 years, it might be time for them to call it a day as far as recording goes.

As a child growing up in the suburbs, Ryan found music as a way to soothe his boredom. After first hearing AC/DC at the age of 10, he was hooked on music. Tracing its roots to the ‘50s, he became obsessed with Elvis, Buddy Holly and Chuck Berry. Somehow that led to grunge, then psych-rock, then jazz, etc. The list goes on and on and his collection of vinyl records continues to grow.
RELATED ARTICLES
anthony kiedisfleared hot chili peppers