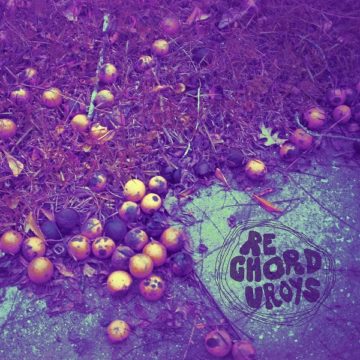 Sometimes an ending is just the beginning of something else, and that was exactly the case when Rechorduroy’s singer and main songwriter Benjamin Garrett dissolved his band Party Boat and moved to Troy, New York, just two years ago, leading to the formation of Rechorduroys, a semi-aquatic shoulder pop band. Their self-titled album came out at the beginning of June via Five Kill Records and boasts a few very well-crafted songs. Let me get into it.

The opening track, “Two Stones”, is a summery malaise tune with a Western guitar line throughout. At just over five minutes, “Two Stones”, is the second longest track on the album, which is nestled down to a very listenable 35 minutes in total. If you like whirling riffs colliding with surf rock drum breaks, then the album is off to a good start!

“Short One” is bursting with punchy guitar lines underneath the airy vocals, breaking as Garrett conversationally sings about waking up at noon with his body a wreck. And hey! We can all relate to that. The band bring a lot to the table in this two-minute song, with the steady rhythm helping the song flow between its sections.

There’s a definite jovial vibe to the album, with each track filled with pop melodies. I was however left wanting a little more from the full album. A few tracks passed me by as I stared out of the window, leaving me thinking “that was a nice feeling”, however not fully grasping my attention. There is a lot more to come from the band with a few excellent tracks on the album, I will be keeping an eye out for future releases.

This Toronto-based artist has worked as a photographer, graphic designer, web designer and motion-graphics designer for the better part of ten years. His love of music both old and new shines brightly through his dedication to The Spill Magazine as Editor and Creative Director.
RELATED ARTICLES
album reviewalbum reviews
8.0