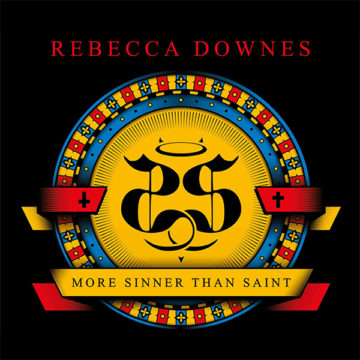 More Sinner Than Saint is Rebecca Downes third album and she just keep getting better and better at her craft. This is one hour of solid rocking blues, with some very exciting guitar playing. Although More Sinner Than Saint is clearly Downes’ vision and album, she does have some solid support from her band which includes Rick Benton (keyboards), Lloyd Baker (drums). Dan Clark (bass) and Steve Birkett (guitars), with whom she co-writes all of the songs on the album, as well as producing most of the album. On More Sinner Than Saint she also has a couple of guests, Alan Nimmo ( from King Kong) and Tony Clarkin (Magnum).

The album kicks off in fine form with the heavy rocker “Take Me Higher”. It certainly sets the pace and the mood, but with “Take Me Higher”, Downes gets the listener in her grip and never lets go. “I  got a bad bad feeling, that this is just not real” she sings.  Things are too good to be true?  Nice way to open the album, and an excellent introduction to the proceedings.

The songs, for the most part, are straight ahead rock/blues songs. There are little surprises, but many highlights.  “If I Go To Sleep”, which features Alan Nimmo on guitar, is the obvious single, is very melodic, and features very tasteful instrumentation. It has a catchy, hard-rocking sound and as with the entire album, it is extremely well-produced.

Although Downes is a talented musician, one should not overlook her strong vocal performance. She sings with emotion and deep conviction. Her voice is expressive and works beautifully with the music she produces.

Downes knows how to pace the album. She rocks out, plays some blues, and adds some more mellow tunes. They songs are all sequenced together that all add up to a complete album. Some songs are stronger than others, and a couple of songs fall into the ‘filler’ category. I sometimes wonder if an artist feels the need to fill a CD. More Sinner Than Saint would work better as a shorter album on vinyl.