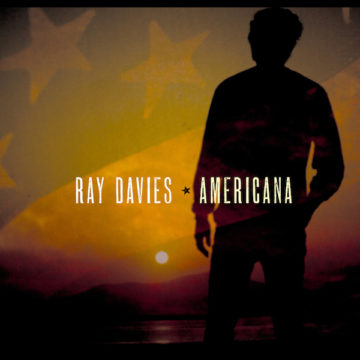 For Kinks fans, 2017 is shaping up to being a pretty good year.  First Dave Davies and Russ Davies (his son) released the great album, Open Road on March 31, 2017 and Ray Davies has now released his first album of new material since 2007’s Working Man’s Cafe.  Since then, Ray has released a compilation album of his solo material (Collected, 2009), a choral adaptation of Kinks songs (The Kinks Choral Collection, 2009) and the rather odd collection of Kinks songs with various artist (See My Friends, 2010).  Ray has been busy, over the past decade revisiting the past.

Part of revisiting the past saw the release of his second ‘autobiography’, Americana: The Kinks, The Riff, The Road. The Story.  While it shares the same name, Americana is more about Ray’s experiences in America, rather than an account of The Kinks.

This album does not break from this theme of looking back.  Ray Davies writes about a hopeful future in this collection of new songs, which, quite frankly, is his best solo album to date.  One of the many highlights on the album is the short, spoken word track, “Silent Movie”, where Ray talks about his friend, the late great Alex Chilton, and a night they share together talking music.  It is a remarkable piece.

This is the album we have been waiting for since The Kinks called it a day in 1994.   Ray has returned to his classic style of writing, and his ability to tell stories.   The back-up band, for this album, is The Jayhawks, a match made in heaven, and for Kinks nerds, former Kinks keyboardist, Ian Gibbons makes an appearance.

My favourite period of The Kinks is their RCA years, basically 1971 to 1975.  This album, to my ears, revisits those days, both thematically and musically.  “A Place In Your Heart”, a brilliant song keyboardist, Karen Grotberg on vocals, could have been on Muswell Hillbillies (1971).  “Message From The Road” would not be out of place on Everybody’s In Show-Biz (1972).  This is not a criticism, but it does show that Ray is still searching and still grappling with issues and presenting them in astounding melodies.

The album, like many of Ray’s best work, is semi-autobiographical.  Americana, is Ray’s take on and his experience in America.  He has spent a great many years in the country, and this album addresses his own “American dream”.  “I had this dream America, Was a very special place,” Ray sings in “The Great Highway”.  He concludes with “Till reality hit me in the face.”

Musically, the album is melancholic, and at times it rocks full force and other times it is more country than most of what Nashville is producing.  Through it all is Ray’s wonderful vocals and his incredible phrasing.  The Jayhawks provide the energy and perfect backing for Ray and they add a great deal to the songs.

Overall, Davies has produced one brilliant album.  It is a consistent listening experience and I am hoping we don’t have to wait another ten years for the next one.

Born and raised in Whitby, Aaron discovered music through his love of The Beatles. This led to a career in radio, writing for various publications, and ultimately a radio show about The Beatles (Beatles Universe), which ran for over four years. When not immersed in music, Aaron enjoys spending time with the loves of his life -- his wife Andrea, and daughters Emily and Linda (all of whom have an intense love of music too).
RELATED ARTICLES
album reviewsamericanamessage from the road
8.0