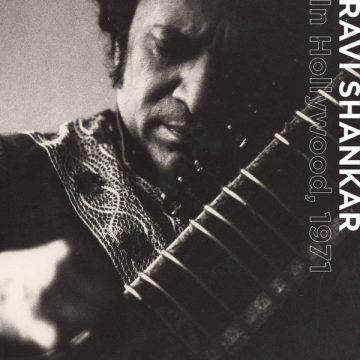 George Harrison attended this intimate performance and listened to a distressed Shankar express his desire to do something to alleviate the plight of the displaced people affected by Cyclone Bhola in East Pakistan (modern-day Bangladesh). This concert led to the successful benefit Concert for Bangladesh on August 1st, 1971 featuring Ringo Starr, Eric Clapton, Leon Russell and Bob Dylan. According to the Rolling Stone, “it also produced the Grammy-winning, three-LP set, Concert for Bangla Desh. Harrison’s song “Bangla Desh” from that time became a big hit.”

Pandit Ravi Shankar was a sitar master credited with popularizing sitar and Indian classical music in the western world. His extensive career, spanning over 80 years, promoted peace through Indian Classical music, education and performance. Since his passing in 2012, the Ravi Shankar Foundation (founded in 2007) maintains this legacy.

Before each recording on the first disc of In Hollywood 1971, Shankar introduces the raga along with the number of beats in both the slower and faster measures of the piece. Traditional Indian Classical music often opens with a slower, free-tempo section before ascending into a marked tempo followed by a furious, virtuosic display of musicianship. Most pieces end on a very fast tempo. These performances are no exception.

“Hollywood Raga Parameshwari” is a beautiful raga composed by Shankar. It opens with a slow Teentaal gat of 16 beats followed by a fast Ektaal gat of 12 beats. Shankar’s inspiration for the raga goes back to his morning travels to Chengali, a little village near Kolkata, in March 1968 while filming his autobiographical film Raga. According to the liner notes, “’Parameshwari’ has flashes of known ragas Bageshri, Bhairavi and Bilaskhani Todi but it is pure Raviji (Shankhar’s affectionate nickname by his widow).” Halfway through this piece, you can hear the musicians shouting out bols, or mnemonic syllables that mark the rhythm.

Shankar dedicates the first track on the second disc, “Dhun,” to Bangladesh, which was “weighing on his heart at the time.” It is a composition based on semi-classical melodies or Folk songs upon which he improvises. After speaking, Shankar opens with a signature sitar flourish and free-tempo improvisation before the tabla enters in. The final piece, “Sindhi Bhairavi,” is a quick Drut composition (often between 160 to 320 beats per minute) in the Thumri or “light classical style” of Hindustani music. As the liner notes point out, “towards the end, the musical conversation between sitar and tabla is incredible.”

Ragas, of which there are thousands, are played to match a season, time of day or emotional state. “What is core to the raga is its Prana, or life, and its power to be heard and to be propagated, to instill its emotional message in the heart of as many musicians and listeners as possible,” Sukanya Shankar explains in the liner notes. “Time will tell the validity of a new raga creation, by its acceptance, popularity and longevity…. Raviji’s ragas can be found in many artist repertoires – that tells you the intensity and emotional effect of his music and his creations.”

The impeccable recording of In Hollywood 1971 is a testament to an album’s power to transcend time and space. The musical mastery of Shankar, Rakha and Chakravarty transport you to a far-off India marked by different borders. If you are new to Hindustani music, listen with an open heart. Most find sitar music to induce a sense of calm. Sukanya Shankar laments, “Oh I miss him so much…but am so grateful we can share his music with you.” 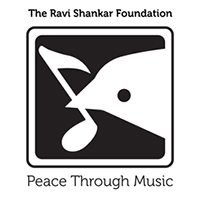 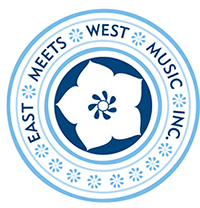