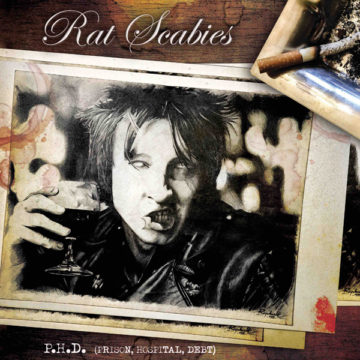 It is hard to believe, but it has been forty years since the Damned released their debut album, Damned Damned Damned. Rat Scabies (born Christopher John Millar)  was of course, the drummer for The Damned at the time, and remained in that seat until 1996.

It is also hard to believe that forty years since that album,  Rat Scabies is releasing his debut solo album. P.H.D. (Prison, Hospital, Debt) is Scabies doing what Scabies does best, full on rock, punk and even a little classic jazz. It is a potpourri of sounds and songs. He has actually delivered an interesting and surprising diverse album.

Sure the punk music is there (“Chew On You”), but also some psychedelia (the brilliantly titled “Floydian Slip”) and he even covers a classic jazz tune, made famous by Louis Prima (“Sing Sing Sing”). The first time one listens to P.H.D. (Prison, Hospital, Debt), one does not have any idea where Scabies is going next.

He also does more than play drums. Along with writing the music for the album, he also plays guitar, keyboards and ‘cigar box guitar’. He is joined by Jesse Budd (Flipron), who contributes to the lyrics and provides the vocals, and Nick Oblivion on bass. The band sounds like they have played together for years. They form a tight unit and tackle the various styles admirably.

The highlight of P.H.D. (Prison, Hospital, Debt) is the remarkable “Rat’s Opus”. A string arrangement opens the song, an orchestral build and some startling vocals. This all builds to a thunderous song that demands your attention. It really is a work of art. Quite frankly, it is not something one expects from Scabies.

Scabies has grown since his time with The Damned. He has taken his time in putting together this band and this album. It has paid off. It is a great album, full of great songs. This should be the start of a very successful and interesting solo career.

Born and raised in Whitby, Aaron discovered music through his love of The Beatles. This led to a career in radio, writing for various publications, and ultimately a radio show about The Beatles (Beatles Universe), which ran for over four years. When not immersed in music, Aaron enjoys spending time with the loves of his life -- his wife Andrea, and daughters Emily and Linda (all of whom have an intense love of music too).
RELATED ARTICLES
album reviewscleopatra recordsrat scabies
8.0