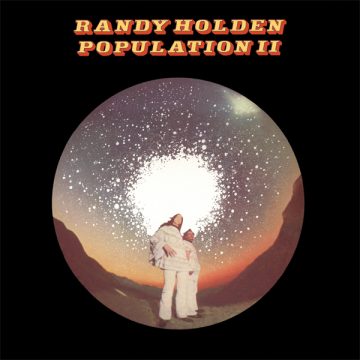 In 1969 Randy Holden parted ways with Blue Cheer, and by 1970 had recorded and released his debut solo album, the magnum opus Population II. Sadly, the album received very poor distribution at the time, but those who did hear loved it, and it became a cult classic. Julian Cope even sings its praises.  It is regarded by many to be the first ‘doom metal’ album and upon listening to it in 2020, that is a very deserving title.

From the time of its release, it has been a very difficult album to find and is quite rare. Finally, after 50 years, Population II is available again and sounding better than ever. The guitar work is outstanding and the star of the show, but a great deal of credit must go to drummer Christopher Lockheed who matches Holden for intensity. And for the record, it is just the dynamic duo on this album.

“I love the sound of a guitar playing” sings Holden as the album opener, “Guitar Song” begins. He doesn’t so much sing it as emphasize it over some very hard and blistering guitar work. The song tears your sonic world apart, and it sets the listener up for the remainder of the album. “I pierce the air with pain, and love,” he declares later in the track. “Fruit And Icebergs”,  Holden wrote for and recorded with Blue Cheer on 1969;s New! Improved!. Sure Blue Cheer were loud and hard, but here Holden turns the song inside out and it is much darker. It is split in two by a short piece, “Between Time”, which highlights Lockheed’s drumming and lulls the listener into a false sense of security, as Holden comes back in full force for the short conclusion of “Fruit And Icebergs”. I can’t think of many songs where so much is accomplished in one minute and 48 seconds.

Side two is where it gets real. Two tracks. “Blue My Mind” and the epic and experimental “Keeper Of My Flame”. The former is speed metal thirty years ahead of its time. He lets loose. If The Beatles were trying to interpret Armageddon with a sound collage on “Revolution 9”, and here Holden tries to do it with his guitar. Notes rain down and Lockheed’s frantic drumming cannot help but create a visual in your head. The visual is not necessarily nice. This is not the peace and love of Woodstock, but doom.

All of this in just over 30 minutes. It is a stunning album that deserves wide exposure. Metal fans should appreciate where the sounds they love originate. Holden’s guitar work is passionate, angry, and downright chilling. When this album comes out of your speakers, it is hard to describe what hit you. Blue Cheer were a hard rock band, but on his own Holden invents sounds. Population II is not so much an album but a force.

Born and raised in Whitby, Aaron discovered music through his love of The Beatles. This led to a career in radio, writing for various publications, and ultimately a radio show about The Beatles (Beatles Universe), which ran for over four years. When not immersed in music, Aaron enjoys spending time with the loves of his life -- his wife Andrea, and daughters Emily and Linda (all of whom have an intense love of music too).
RELATED ARTICLES
album reviewalbum reviewsblue cheer
7.0