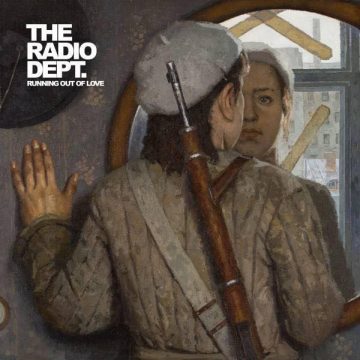 The Radio Dept.
Running Out Of Love
Labrador Records

For some time now Swedish indie-rockers, The Radio Dept. have been a staple in the provocative lo-fi dream-pop game. Their latest, Running Out Of Love, is true to from but provides a new boldness and maturity. Duo Johan Duncanson and Martin Larsson breeze through heavy reverb’d grooves and driving drum machines. They play with a myriad of sounds and synths that adhere to their ever joyful and pleasant aura. However, this album is much more than it may seem. The album title and cover are no coincidence and their is clear intent and symbolism for Sweden’s current political state. The album emboldens the freedom of Belle & Sebastian, the chaos of Talking Heads and the cheerfulness of The Postal Service.

This makes all too much sense given that The Radio Dept.’s music has always successfully found a way to be both melancholy and happy – joyful, relaxing and somber. They have a sure-fire way of taking a person outside of themselves, of creating a safe space to contemplate real issues in today’s society. In doing so, this album demonstrates that protest music (if you want to call it that) does not need to chant, scream or burst your eardrums. It can be subtly powerful.

The record starts off with “Sloboda Narodu” in the ambient, post-rock vein of Hammock, brushed with African rhythmic percussion. The track title is Serbo-Croatian for “Freedom to the People,” setting a pace far and away from the typical dreamy, synth-washed pop album. Rather this is an all out manifesto of our dystopian era – giving a concentration to social, political and economics happenings. The next tune, “Swedish Guns” is a bouncing, danceable track with a catchy hook. A hook that politely criticizes their home nation’s ever-growing arms industry with a sarcastic tone. Moving on to the driving groove of “Committed To The Cause” Duncanson & Larsson continuously build up and break down. Clingy hi-hats, pumping funkadelic bass & joyfully energetic piano riffs all stack on to one another and eventually find a place beneath a driving lead synth line and calm but enigmatic vocals. Towards the end we get “Teach Me To Forget,” which goes for a stripped down version of an EDM-rock banger – not far from where Coldplay went with “Sky Full Of Stars” but more fuzzed out and breezy.

The LP has a fine juxtaposition. It is both peaceful and powerful, sweet and serene. Airy musical moments allow the listener to levitate with uplifting ideas of change for our new world. Duncanson’s voice has a distancing echo and calm. However, the messages don’t always echo such an elegant message. Rather, the same line that has you closing your eyes, smiling and singing out loud, may make you stop in your tracks, raise a brow and think it through. Running Out Of Love is, at once, a title, a message and an idea. It is a bold statement met with The Radio Dept.’s shoe gaze indebted, pop induced sound. It makes complete sense and makes us fall more in love with the already established cult heartthrob. The duo did what they do best and managed to create new face in the process, musically and politically.

After majoring in business & entrepreneurship at UCSB and traveling the world, Andrew moved to Los Angeles to pursue music and not give up his love for surfing, hiking and yoga. He is also in a couple really cool, up and coming, indie-rock bands in LA - Mothlight & Lone Kodiak.
RELATED ARTICLES
album reviewslabrador recordsrunning out of love
9.0