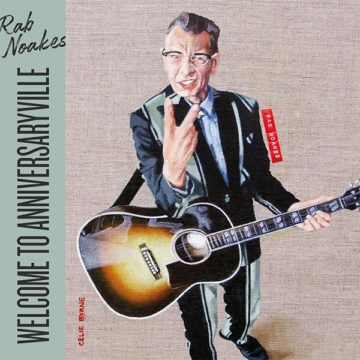 Rab Noakes may not be a household name in North America, but in his native Scotland, the man is a revered artist. Here he is primarily known for working with Gerry Rafferty and for being a member of Stealers Wheel, but he is much more than that. He is highly regarded in the folk world, and artists such as Ringo Starr and Bob Dylan hold him in high esteem, in fact, he released one album on Starr’s Ring O’Records (1978’s Restless). Welcome To Anniversaryville is his 20th album and his first full length album since 2015’s I’m Walkin’ Here.

Noakes just turned 71, and judging from the sleeve of the album, he is not going sliding into retirement or old age any time soon. That is not to say the album Welcome To Anniversaryville is an angry album, because it is not, however it is also not an album of mellow Scottish folk songs. Much like Dylan, Cash and McCartney, this is an artist facing his age and mortality by looking back and forward.

A simple count in, and the album is off in fine style with the beautiful and moving “Let The Show Begin”. “Standing, waiting in the wings“, sings Noakes. “Counting the seconds til the show begins.” He is excited and nervous to get the show going. “There’s no stopping now” he adds, as the album begins.

Although most of the songs are originals, his choice of covers is not only unique but very telling. “Long Black Veil”, “Anniversary Song” (an obvious choice and he handles it beautifully); “Tennessee Waltz” and “Just One Look”, which is the off one out. It is a cover of Doris Troy’s 1963 hit. He takes his own turn at all of the songs, and transforms them into traditional Scottish songs, and they work.

But it is his originals that are the standouts. “Gently Does It” is Americana at its best, and the violin, and backing vocals are perfectly arranged to add to the poignancy of the song. He taps into Scottish folk with his “The Handwash Feein’ Mairket” and even pays tribute to Elvis Presley with “TCB (Working Man and Working Woman)”.

Noakes surrounds himself with top notch players and singers. Kathleen MacInnes provides heartbreaking vocals throughout and is featured prominently on songs such as “Tennessee Waltz”. Innes Watson plays beautiful violin which accentuates the songs, adding a bit of Celtic flavour. Through it all is Noakes with his wonderful voice full of emotion and feeling. His guitar work is pretty damn good as well.

Welcome To Anniversaryville is an album that celebrates a number of anniversaries in Noakes’ life. The songs do not address each one but they do reflect the times, either as a cover, or an older song that has been waiting to be recorded (“London Town”) or a Scottish folk song (“The twa corbies/An Dà Fheannaig”). But it all adds up to one strong, well-produced and beautiful album. This could be Noakes’ best album, which given his catalogue, is saying a great deal.

Born and raised in Whitby, Aaron discovered music through his love of The Beatles. This led to a career in radio, writing for various publications, and ultimately a radio show about The Beatles (Beatles Universe), which ran for over four years. When not immersed in music, Aaron enjoys spending time with the loves of his life -- his wife Andrea, and daughters Emily and Linda (all of whom have an intense love of music too).
RELATED ARTICLES
album reviewalbum reviewsfolk
8.0