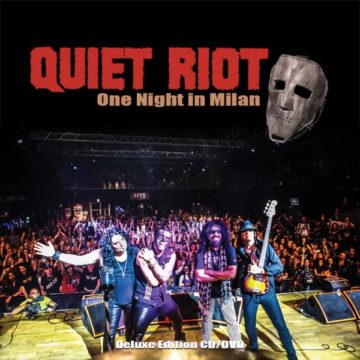 It may be hard to believe, but One Night in Milan, recorded in 2018, captures Quiet Riot at the first concert they have ever played in Italy. Even more astonishingly for a band that has been around since 1977, this is only their second live album, and One Night in Milan is a brilliant live album.

The lineup for this performance is Frankie Banali (drums, percussion), Chuck Wright (bass, backing vocals), Alex Grossi (guitars), and James Durbin (vocals). Durbin is the new kid on the block, joining in 2017 and featuring on their most recent studio recording, Road Rage. He performs admirably, proving that he has the pipes for this band. He does not need to compare himself to former vocalist Kevin DuBrow; judging from this album and Road Rage, Durbin has started forming his own unique voice as lead singer. Banali, who was part of Quiet Riot’s 1982 reformation, is the longest-standing member in the current lineup.

Quiet Riot should also be applauded for not doctoring this album in the studio. The result sounds fantastic, and is a true live album, recorded in one night. This is the sound of four guys having fun, rocking out, and soaking in the love from fans.

There is also a nice mixture of new and old. Sure, the hits are here (“Mama, Weere All Crazee Now”, “Bang Your Head”, and “Condition Critical”), but also present are songs from Road Rage (“Can’t Get Enough”), 1995’s Down to the Bone (“Whatever It Takes”) and 1993’s Terrified (“Terrified”). All selections from their thirteen-album catalogue are welcome additions to the setlist.

One Night in Milan is the sound of a band proud of their past, and confident about their future. This is not nostalgia, but simply pure heavy metal, and it is glorious. Quiet Riot is in their element here, playing live and doing what they do best: rocking out.

Born and raised in Whitby, Aaron discovered music through his love of The Beatles. This led to a career in radio, writing for various publications, and ultimately a radio show about The Beatles (Beatles Universe), which ran for over four years. When not immersed in music, Aaron enjoys spending time with the loves of his life -- his wife Andrea, and daughters Emily and Linda (all of whom have an intense love of music too).
RELATED ARTICLES
album reviewalbum reviewscondition critical
8.0