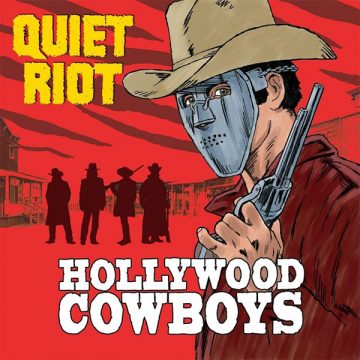 The music is exactly what you would expect from Quiet Riot – there’s no mystery in this package. The album kicks off with grinding guitars, heavy beats from Banali, and eventually Durbin comes in with the perfect vocals. The album tends to roll along in that fashion from beginning to end, and to be honest there is not a lot of variety. Then again, variety is not what fans are looking for from this band or album. Of course, there is the obligatory ballad, “Roll On”, to show their more sentimental side, but for the most part, the album is pure rock.

In some respects, this is a sophomore album of a new lineup. It is easy to fall into the trap of comparing this to earlier albums, but with the recent addition of Durbin,this is an updated version of Quiet Riot,and the album should be listened to in that way.

This is a band who knows what they do, and they do it well. It is well-produced, and they are a tight unit. Their musical skills are top notch, but if heavy metal is not your cup of tea, you would be better off checking out other bands. There are, however, some fine songs on Hollywood Cowboys, including “Wild Horses”, which is probably the most commercially appealing song on the album. More of a power song than heavy metal, it also allows band members to show off their talent, especially Durbin.

Born and raised in Whitby, Aaron discovered music through his love of The Beatles. This led to a career in radio, writing for various publications, and ultimately a radio show about The Beatles (Beatles Universe), which ran for over four years. When not immersed in music, Aaron enjoys spending time with the loves of his life -- his wife Andrea, and daughters Emily and Linda (all of whom have an intense love of music too).
RELATED ARTICLES
album reviewalbum reviewsfrankie banali
9.0