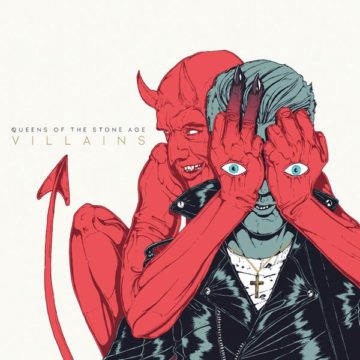 Queens of the Stone Age fans rejoice; the boys are back in tow! It has been nearly a four year musical drought for the Palm Desert band and rock n’ roll has become restless in their absence. After all, QOTSA are some of the last remaining ambassadors for the genre which swore it’d never die. With their newest release, Villains, the band keeps the rock flag waving proudly. The band has perfected their steady, attitude drenched style and surpassed their past records in both performance and sound quality. However, while this is great news for the bands loyalists, it is seriously doubtful that any past naysayers will be jumping on the QOTSA ship with this record. The band breaks no new ground and doesn’t try to on Villains.

Right away, the mixing and recording quality will jump out on Villains. It is clear that this is their most well produced record to date, and while it will sound good through speakers, the album shines when heard through high quality headphones. The end of the opening track, “Feet Don’t Fail Me,” is the best evidence of this as it sounds much bigger when confined. All of the instruments sound crisp on Villains, but the keyboards and other “guest” instruments stand out. The theremin on “Head Like A Haunted House,” stands out in particular as it finds its perfect spot in the mix and breaks up some monotony. One thing QOTSA must be commended for is their understanding of tone, specifically in the guitar department, and how it serves the song. Not every guitar is full blast all the time, they know how to use their tone knobs, and they often work with sounds other groups may consider to be too frail. However, this element creates space in their tracks and helps cover each frequency.

Villains suffers from a common symptom found on QOTSA records: a lack of dynamics and emotion. Make no mistake about it, this is a record designed to be background music for a long drive underneath a conversation, or maybe the soundtrack to a Quentin Tarantino movie yet to have been made. It will not however produce a strong emotive response, which is what many listeners desire from music. Each song off of Villains drones and some take that droning to a nauseating level. The second track, “The Way You Used To Do,” will bring listeners to the verge of vomiting due to the obnoxious clap track that doesn’t let up for the entirety of the song, which is well over 4 minutes (clap tracks are one of the worst things to ever happen to music). A dizzying haze of more droning continues until track number 5, “Head Like A Haunted House,” which will jar the listeners awake with its guitar tones and female background vocalist screaming “You O.K.?.”

If you like QOTSA you will absolutely love this record. Nothing negative can be said about the mix or arrangement; it is mechanically a near perfect record. However, if you are looking for music to challenge you, music to pump you up, or music to sympathize with, don’t look to Villains. QOTSA makes music to be listened to, not music to be felt, and they are the best at what they do.

The Spill Magazine is a Toronto-based online publication dedicated to covering the independent music scene with a strong focus on our thriving hometown talent. Our writers bring you up-to-date news, in-depth features on musicians and reviews for the latest CD releases. We also travel to the front lines for all local festivals including Canadian Music Week and North by Northeast. Don’t forget to check out our Facebook and Twitter pages for all daily Spill updates.
RELATED ARTICLES
album reviewsmatador recordsqueens of the stone age
7.0