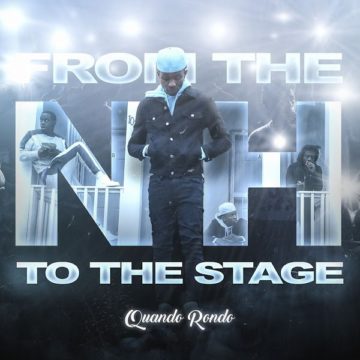 Quando Rondo
From The Neighborhood To The Stage
Atlantic

Quando Rondo has released his debut album titled From The Neighborhood To The Stage. With 13 tracks it features guest appearances from NoCap, Shy Glizzy, BlocBoy JB, and Polo G, he is able to deliver a great body of work.

Quando Rondo offers up a melodic style mixed with great lyrics. “Gun Powder”, “My Yoppa”, and “4th Qtr” sound sonically pleasing and are filled with catchy hooks. Others, such as “Imperfect flower” and “Emotional Way Of Thinking”, are very introspective and shows the pain and life experience that Quando Rondo has gone through.

One criticism of the album is that the features are underwhelming. BlocBoy JB and Shy Glizzy’s features could have utilized better or used on a different song.

Despite the features on the album, Quando Rondo’s first album is a solid album that people should definitely check out.

I'm a just lover of hip-hop and photography who grew up in Ajax Ontario. Through this platform I hope to share my opinion on the world of rap and bring a new perspective to new upcoming acts, artist, and the music scene. In addition to being a lover of hip-hop, I love to capture photos of these artist in the mean while.
RELATED ARTICLES
album reviewalbum reviewsatlantic
6.0