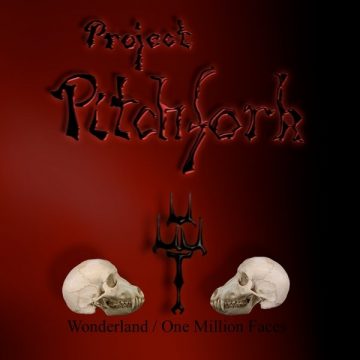 Originally released in 2007 online for download, Wonderland/One Million Faces has now been released as a CD due to popular demand. Each song has been either remixed or remastered to add that extra oomph, making it a bit of a different experience for fans.

Project Pitchfork was founded in Hamburg, Germany in 1990. The Electro Industrial band is made up of Peter Spilles, Dirk Shcheuber, and Jürgen Jansen. Much of their success has been attributed to the dark Gothic sound within their music and when accompanied by their skills in improvisation, it’s no wonder why the band has such a large following.

The album is more than just a collection of Techno songs. At first, a lot of the songs sound the same, but that isn’t necessarily the case. Some do have their own distinctive sounds while some bleed into others, but there is some distinction to be heard within those.

There are the sound effects of children shouting and monks chanting in the upbeat “Wonderland” or the Dalek-sounding voices accompanied by the use of a violin and piano in “Résumé.” “Consequence” features broken-record-like voices, animal sounds, and unusual squeaking in the middle of the song with the bonus operatic music in the end. There’s use of dripping water and rubber ducks in “Research,” which makes it sound like it belongs in an underground mind stage of an ‘80s video game.

One track that stood out in particular is “Ouverture.” Chimes, monk chants, rain, and other sound effects all compile to make a dark and exciting track. It will leave first-time listeners wanting to hit the repeat button several times.

While the album isn’t for everyone, it’s something electronic fans should take the time to listen to, and a nostalgic visit down memory lane existing fans of Project Pitchfork will enjoy.

Music and writing have always been a big part of Sabrina's life. She would "borrow" her dad's rock and metal CDs from his collection and listen to them while going through the art books. Although she doesn't write angsty poetry anymore, she does have a Bachelor's Degree in Journalism which she uses to pursue a creative career path. When she's not writing, Sabrina can be found juggling a coffee cup and DSLR or Instagramming her food.
RELATED ARTICLES
peter spillesproject pitchforktrisol music group
7.0