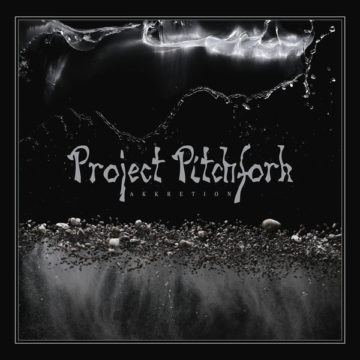 Project Pitchfork is an electronic band based out of Hamburg, Germany. Akkretion is their 17th studio album, and their first since 2016’s Look Up, I’m Down There. This is yet another album delving into the darker corners of life with hard-driving electronic music as its backing. Also, be aware: There are two versions of the CD, the regular version and a deluxe version, which includes an extra song (“Tree of Life”) as well as remixes of four songs.

The title of the album, Akkretion, is a clever spelling of the word ‘accretion,’ which in astrophysics means the process of change. The title fits the album perfectly. In many regards the overarching theme of the album is change.

This is a hard album and presents as a wall of sound coming at the listener. Some of the songs start out with a beautiful melody played on piano, with atmospheric background (“Crossfire” is a good example). But soon it develops into a much harder-hitting song. This makes for a very interesting listening experience. Whereas some songs come out full-force from the gate; at times there is a slow build.

That is not to say that the songs are void of structure or melody. The songs are hard, but Project Pitchfork has created some intense melodies and the songs all flow together to form a solid album. And make no mistake, this is an album that should be listened to from beginning to end.

Peter Spilles’s vocals have never sounded better. As with previous albums, his growl and singing are indications of his conviction to these songs. He uses his voice in the same manner a musician uses an instrument, and it becomes part of the song.

Musically and lyrically, Project Pitchfork shines the light into the dark corners of our existence. Not for shock value, but because it is their reality, and sometimes ours. Yet the production and the use of sounds allow for the overall effect to not be so depressing, but rather comforting in the sense that others are dealing with the issues.

Akkretion is not for everyone. But, given the chance, one hears a very personal album full of intensely beautiful melodies and thought-provoking lyrics. It is well worth your time to listen to this album. After nearly 27 years of making records, Project Pitchfork continues to make relevant, exciting, thoughtful music.

Born and raised in Whitby, Aaron discovered music through his love of The Beatles. This led to a career in radio, writing for various publications, and ultimately a radio show about The Beatles (Beatles Universe), which ran for over four years. When not immersed in music, Aaron enjoys spending time with the loves of his life -- his wife Andrea, and daughters Emily and Linda (all of whom have an intense love of music too).
RELATED ARTICLES
album reviewsascensionpeter spilles
9.0